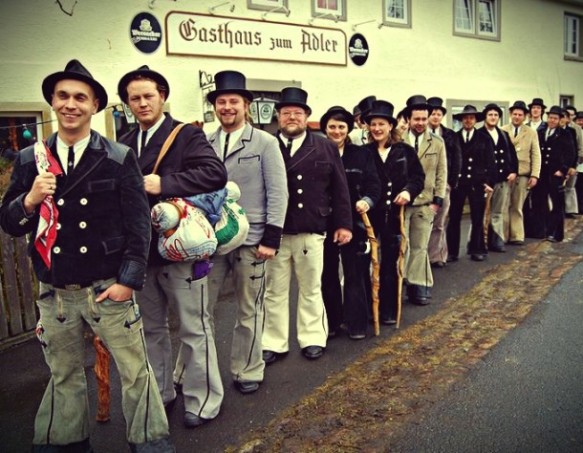 Bellbottoms and a Top Hat. What More Could You Need?

For some, a journeyman is a slightly elevated type of handyman. But the term denotes much more. It’s a designation with a storied history, albeit one that has become increasingly rare in the last few hundred years. To be a journeyman in the traditional sense of the word is to embark on a right-of-passage period for a tradesperson such as carpenter, roofer or woodworker. Journeyman is the stage that comes after being apprenticed but before being deemed a master.

The “journey” in journeyman is derived from the French word journée, meaning day, which is historically the journeyman’s billing cycle. In other words, they are a rarefied day laborer.

While the etymological connection with journeying isn’t there, traveling is a staple of the journeyman’s life. He or she must complete a requisite Tippelei or Walzmust–a three year-plus journey without money where a journeyman perfects his or her craft. Journeymen often wander the world, usually living and working for a few months at a construction site before moving on. During this period, they are not allowed to pass within 50km of their hometown.

They are not allowed to carry much cash, use public transport or have a cellphone. Progress is made by hitchhiking or walking. Journeymen only carry a small bundle called a Charlottenburger with the barest trade and personal items.

As to their unique outfits, a Worldcrunch article that followed Robert, a modern-day German roofer journeyman, says these garbs are highly symbolic:

Black is for woodworkers, the eight buttons on the jacket stand for the eight hours of the workday, three buttons on each sleeve represent three years in apprenticeship and three years as a journeyman….In contrast to the black and white of Robert’s clothing is his red tie. Besides being a symbol of the particular brotherhood to which he belongs, it’s a symbol of honesty. When they start out, journeymen don’t wear the tie: they must earn it by first passing the initiation rites and then with their behavior.

The practice is in decline for somewhat obvious reasons–self-sacrifice and living without a cellphone are unthinkable for most people nowadays. Robert says there are only about 600 traditional journeyman left, most of whom hail from Germany and France. 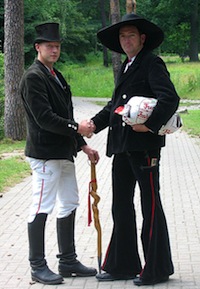 While the outfits are somewhat overwrought in our opinion, we think the idea of spending years perfecting a trade a good one. If our homes and stuff were made with the care and expertise a traditional journeyman possesses, perhaps we’d appreciate and hold onto things a longer than we currently do.

We also find it interesting that the basis of traditional training a craftsperson–someone who basically makes our stuff–is living without stuff. Roofers without roofs. Carpenters without homes. Craftspeople without personal possessions. Perhaps it is only through living without that we can truly appreciate the value of living with.