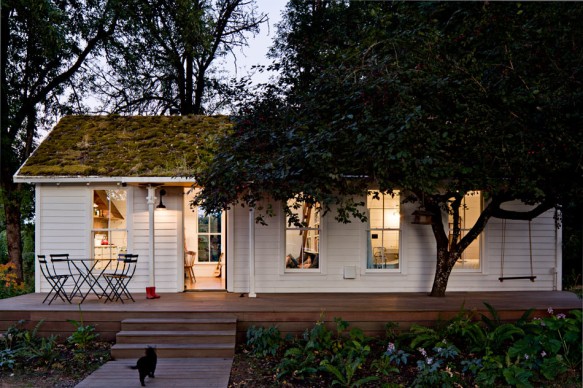 While it’s a nice idea to think a family could live in a sub 300 sq ft tiny house, the reality is that at a certain point you have to concede you can only downsize so much before quality of life is seriously compromised. That said, there are many options between tiny house and McMansion. Interior designer Jessica Helgerson’s home is a great example of one such option. At 540 sq ft it’s small, but not microscopic. And its thoughtful layout and great material choices make it seem like a great place to live and raise a family.

Located right outside Portland, OR, the house is an exercise in creative reuse. Nearly all of the materials used were reclaimed. And the structure itself has seen many lives. From Helgerson’s website:

It was first built in the early 1940s as part of Vanport Village; a quickly erected development built to house shipyard workers. When Vanport Village flooded in 1948 this particular little house was floated down the river to Sauvie Island, where it became the goose-check station. Years later it was remodeled to become a rental house.

The house centers around a great room, which has the kitchen, a dining area and lounge area with two custom built sofas that double as guest beds and have storage in their bases. The house’s one bedroom is occupied by the kids, who have built in bunk beds. Both the kids’ room and bathroom have low ceilings to accommodate an overhead loft where the parents sleep.

Outside, Helgerson and her husband installed a lush green roof and they are also trying their hands at food self-sufficiency with a large outdoor garden as well as a 1200 sq ft greenhouse on the property.

With its space efficient design and cohesive, but unfussy, furniture and material choices, Helgerson’s house is a great example how, with a bit of thought and consideration, a little space can go a long way.