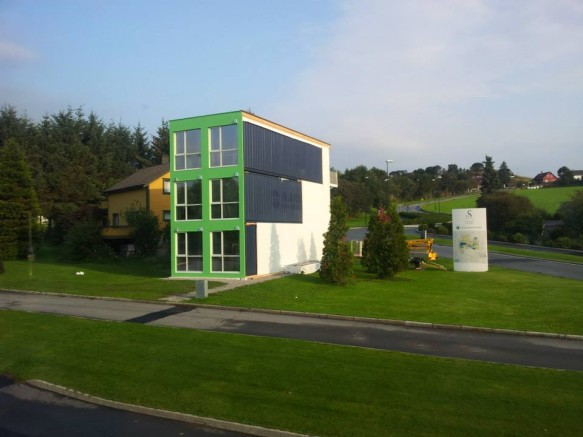 A couple weeks ago, we looked at Lund University’s scheme for low cost student housing, using innovative micro-houses instead of traditional dorms. Another Scandinavian project is trying to achieve the same end, albeit with different means. At the University of Stavanger in Norway, a new firm called MyBox is attempting to make low-cost, modular student housing out of shipping containers.

MyBox is far from the first student housing project using shipping containers. A couple notable examples include the Cité A Docks in Le Havre, France and the overflow dorms at the University of Utrecht in Holland (both cities, not coincidentally, are major shipping hubs). The former is an alternating array of 100 units and four floors designed by Cattani Architects. The latter was made by Dutch firm Spacebox and designed by Mart de Jong. The Utrecht units are over 300 rainbow-colored shipping container modules, stacked three high and staggered; their exteriors were modified so they don’t look quite so container-y.

Similar to the Atira housing we looked at a few weeks ago, all three projects show varied and compelling uses of shipping containers as housing structures. Using shipping containers in these special use situations strikes us as similar to appetizers at restaurants; because they have smaller portions and cost less, chefs tend to be more daring with appetizers than main courses, often leading to more interesting, tasty food. Similarly, architects can be bolder, more innovative and stray further from architectural orthodoxy with housing that is for special populations–e.g. students or women’s shelter residents–than they are with standard residential housing. We hope these appetizing little structures–or at least elements of them–make their way into the permanent menu of residential architectural thinking.

Cité a Docks images via Freshome