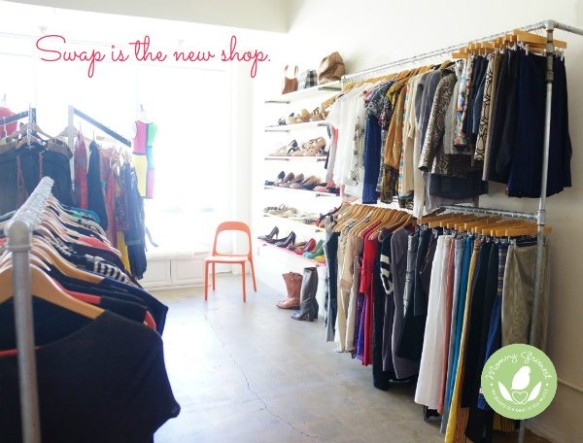 The average American woman spends $60 and creates six pounds of waste on clothes every month. With around 160M American women, that’s $10B and 1B tons every month (American men spend a relatively measly $35). One of the reasons there is such a high demand for clothes is novelty. Many people–and it’s probably fair to say particularly woman–enjoy wearing clothes that are au courant even if the old ones are still in good shape. A new shop in Los Angeles called Give + Take Swap Boutique has made a way for women to scratch their fashion itch without the big price-tag or heavy environmental toll.

It’s probably easiest to think of Give + Take as an offsite closet filled with clean, new-to-you designer garments, accessories and shoes. By paying a $35 monthly fee ($30 if paid ahead of time), you get access to the closet. Members bring in their nice but unused or unloved items and each is assigned a point value based on its retail value. Here’s how they explain it:

A dress that’s worth $100 would “cost” 6 points at Give + Take. If you brought in the dress, you’d get 6 points of credit in the store. If you want to take home the dress, you’d need 6 points to do that. You can accumulate points for larger items—i.e. bring in two $50 dresses and swap them out for a $100 pair of shoes.

After you swap the clothes, you own them–i.e. you’re not renting. Assuming they’re still in decent shape after your use (which could be for a day), you can swap them again.

One of the boutique’s partners Rachel Sarnoff told us, “Usually women come to us with bags of clothes that have been sitting in the back of their closets. They rack up a lot of points with those clothes, and then continue to swap more clothes in and out.”

Sarnoff said there are all varieties of sizes available. And even though there is only one Santa Monica location, some women have flown across the country to swap their clothes. Rather than having an ongoing membership, they bring in their unused clothes, pay for a $40 day pass and swap to their heart’s content–a scenario we could see as being way cheaper than a conventional shopping spree.

The so-called “sharing economy” has taken off for big ticket items like cars and hotel rooms, but not so much for the smaller stuff. Most of the time it’s cheaper to buy a power drill than it is to geo-locate, pickup and return a shared one.

But fashion could be different. Unlike power drills, novelty is prized in fashion (unless you have some weird power drill fetish). Having access to a big selection of new clothes could be a big draw. Second, as we mentioned above, the dollar amounts add up. According to Mint.com, between 2010-2011, Los Angelenos spent $243/month or 21% of their income on clothes (Manhattanites spent $362, which is the same percentage of their income). These are big numbers over time, especially for stuff that’s often not worn much after a few initial uses. We won’t even delve into the environmental and human rights implications of the fashion industry. The Give + Take boutique offers the novelty without breaking the bank or bringing countless under-used garments into the world.

If you’ve ever been there, let us know what you thought in our comments section.