Forgive us if we’ve been harping on about the experience versus stuff subject. Tis that time of year. Every scene of our lives seems set to the drunk-on-eggnog caroling of marketeers, urging us to get more stuff. And we talk about it so much because we believe it’s one of the most important topics of our times. This tightly wound knot, where retail value has become inseparable with emotional value, must be undone–for the sake of our planet, wallets, closets and lives. Anyway….

This leads us to James Wallman, a British trend forecaster who has defined and named this global material and existential crisis. He calls it “Stuffocation”–an apt name for the asphyxiating quality our addiction with stuff has produced in our planet and lives. He has penned a book of the same name, and in this short talk at the Royal Society of Arts, he outlines some of its concepts (note: the actual talk is the first 20 mins or so of video). 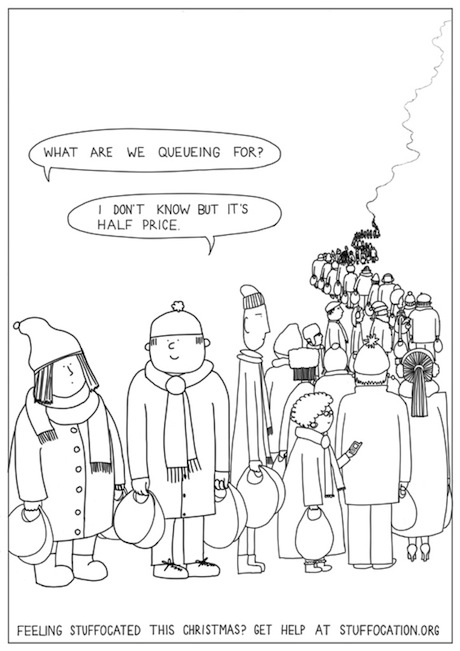 He touches on the now-familiar ecological and psychological problems that stem from stuffocation. But he also provides solutions. Rather than dissolving the world economy and moving to primitive, agrarian societies, Wallman suggests the movement from materialist to experientialist values. He envisions and predicts a new economy that supports the experience of living great lives, not the accumulation of the symbols we’ve been trained to believe denote them. To give an idea of what an experientialist economy would look like, he challenges the RSA audience to spend the same amount of money they would normally spend on stuff on experiences. E.g. take that money you’d spend on a Rolex and go on a vacation.

The book is already available in the UK. It’s US release is January 20, 2014 (full review coming soon). In the meantime, watch Wallman’s talk, check out his website and let us know what you think.