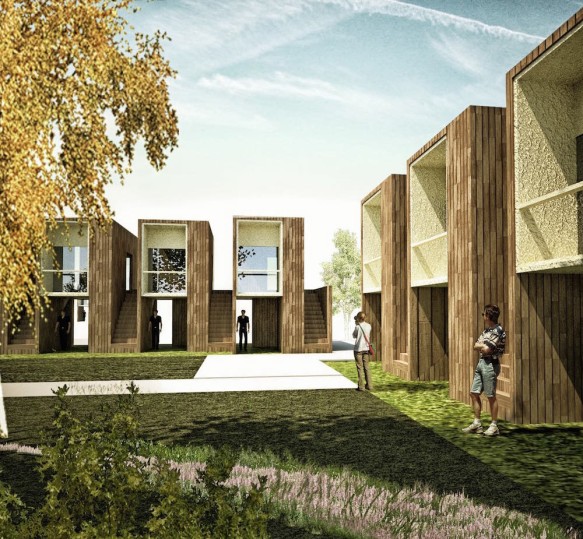 Man built most nobly when limitations were at their greatest.

You’d think that if we had access to boundless resources for our architecture, we would build the most amazing structures, incorporating the highest tech, the best quality, the utmost in efficiency and so forth. But such is not usually the case. More often unlimited resources give birth to McMansions and $100M Park Avenue duplexes–structures that hardly indicate the advancement of architectural thought, much less human evolution. The trouble is when you have no limits to external resources, you typically don’t need to rely on internal ones. In other words, excess tends to breed creative laziness. On the other hand, limited resources and the imposition of other constraints often spurs creativity. It’s a much trickier proposition to fulfill on objectives, not with anything you can imagine, but with whatever is available, which might not be much. This paradox is why we features so many interesting projects geared toward homeless populations. In these projects, limited budgets and spaces are not barriers to ingenious design, but the reasons they exist.

This phenomenon was demonstrated in spades with the Tiny Home Community Competition, launched by the AIA North Carolina Activate14 committee and the Raleigh/Wake Partnership to End and Prevent Homelessness. The competition sought out the best designs for a tiny house community built on a small parcel of donated land on the outskirts of Raleigh. The winning design, when built, will serve some of NC’s 11K+ homeless citizens. From the competition website:

Tiny home communities cannot eliminate poverty or homelessness, but they can create a more lively, caring, and diverse city. The goal is to generate innovative micro-housing communities that can repair and enliven our social fabric and help people transition out of homelessness.

The entrants were to meet a number of criteria such as affordability, the inclusion of a community center and garden, modular and prefabricated construction, a design that includes natural ecology and sustainable lifestyles and a design that can use leftover city land “as a resource for mending social and urban fabric.”

Winners were announced a couple weeks ago. Rather than a grand prize winner, entries were given awards based on specific merits. Merit categories were prefab construction, community engagement, affordability, aesthetic and community.

It’s worth checking out the competition winner’s page, as judges gave pointed praise and criticism for each design. Citizen Engagement Merit Award winners Heather Ferrell, Hiroshi Kaneko and Shane Gibbon’s design showed “true grit in a good sense of relationship with the neighborhood,” but while the judges liked “the concept of having the residents build it themselves,” their “experience shows that in reality it costs more to have coaches come in to teach how to build.” Affordability Merit Award winner Jeffrey Pinheiro and Derek Zero’s design “was simple, restrained, portable, well insulated with SIP, and had a very good site plan,” but some judges thought it might be “too cubicle-like to seem attractive to the residents,” and “there were a lot of questions about how to fold down a queen-sized bed without stepping outside of the unit.” Aesthetic Merit Award winners Gonzalo Carbajo, Inanc Eray, Pinar Guvenc and Marco Mattia Cristofori’s design “was the most architectural and formally organized project in the competition, and the units had great clarity,” however “the two story units increase cost and decreases accessibility.”

Despite some of the critiques–which are par for the course for such a competition–the winners showed a ton of great ideas, especially considering the lot they are to be built on occupies a mere .32 acres and units were conceived to be constructed quickly and affordably. Moreover, they are are proof positive, at least to this author’s mind, that fewer things spur innovative thinking like the imposition of constraints. Download the winner board pdf to see more details on all of the project.