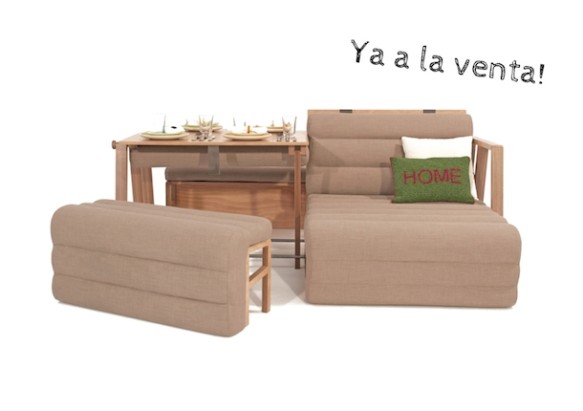 Multifunctional Sofa Will Blow Your Mind

For some, hosting the ability to host dinner parties is a fairly important criteria to meet for their home. But if you’re living in 500 sq ft or less, it can be pretty tough to justify the space to house a proper dinner table, much less the chairs to surround it. Spanish designer Humberto Navarro, founder of UNAMO design studio, has a pretty slick solution for this most vexing problem. It’s called 3MOODS and it’s a sofa that hides a table and bench big enough for an eight person sit-down meal. The sofa is even big enough to sleep a compact person…somnolence being the third mood presumably.

The 3MOODS frame is made of sturdy bamboo ply and all the hardware is stainless steel. We think it looks relatively nice, though does bear a striking resemblance to your run-of-the-mill futon sofa.

UNAMO is offering the 3MOODs for €2400 ($3050) without tax and shipping (to non-Euros, they said they’ll ship anywhere). Not cheap, but for certain people, this could be a life-altering piece of furniture.

UNAMO is also running an Indiegogo campaign, whose motivation is explained in Google-translator-ese: “We need that 3MOODS is known worldwide, so we must be present in international exhibitions and fairs such as Milan and Paris; promote our product in shops, through advertising…” Basically, they’re trying to get their business together and make prototypes. Given that they’ve raised 75% of their $13K goal with 25 days left, I’d say their chances look good. We look forward to seeing more.