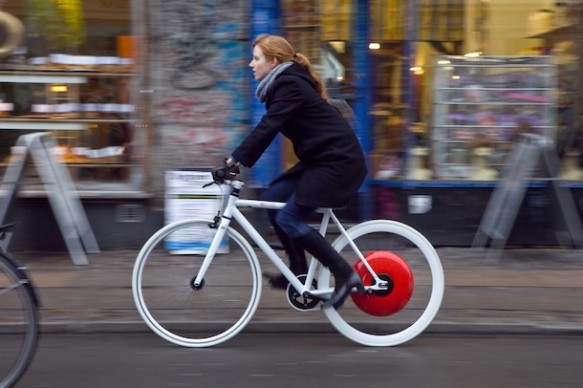 Electrify Your Bike with these Revolutionary Wheels

If your commute is too far for a bike ride, but too short for a drive, you may have considered an electric bike. E-bikes promise less carbon, effort, hassle and expense than a car. But buying another bike, particularly one of the ungainly e-bikes that seem to be popular, might not be so appealing. A couple new products are offering the perfect solution: by slipping in a special wheel, they turn your existing bike into an e-bike. 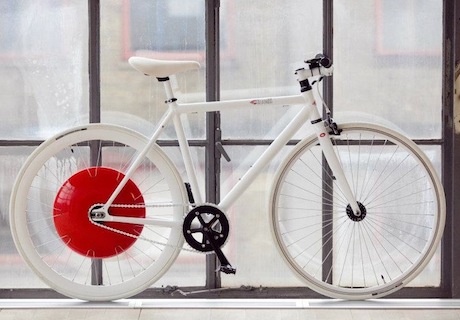 The Copenhagen Wheel by Superpedestrian actually measures your power output and automatically determines when you need an extra jolt. Power is derived in the same way hybrid cars get theirs. The wheel “captures the energy dissipated when you brake or go downhill, storing it in a lightweight and high-capacity lithium battery,” according to SP’s website. The company reports that the battery has a 15 mile range when fully charged (it’s not clear why it can’t be continuously charging).

The wheel also feature a Software Development Kit (SDK), which enables app developers to hack the wheel to make it do things like pollution monitoring and navigating.

The wheel was invented at MIT’s SENSEable City Laboratory and unveiled at the 2009 Copenhagen Climate Talks. The team behind the wheel decided to form a company late last year. The NY Times reported the other day that the company just received $2.1M in funding. The wheel is set to be released in late November. Pricing unavailable at this point.

The other wheel is called the FlyKly. The wheel’s development is being funded through a Kickstarter campaign (it has long since passed its $100K goal). It is packed with bells and whistles (figuratively speaking). It is available in 26″ and 29″ varieties and weighs 9 lbs. You can plug in the FlyKly for additional power and achieve a 30 mile range. You can lock the wheel remotely. They have their own SDK for hackability. It also has an available light that is charged via a dynamo, which also has a USB port where you can plug and charge your phone. FlyKly is projected to ship in April or May of next year, and you can buy one with a $590 pledge. 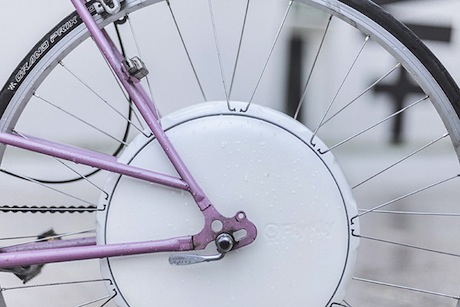 These wheels look and perform remarkably similar to one another, and one (we won’t say which) might be derivative of the other. That’s okay with us. Just as there are Toyota Prius’ and Honda Insights, the world can probably stand to have more than one ultra-efficient, bicycle-based mode of transportation.