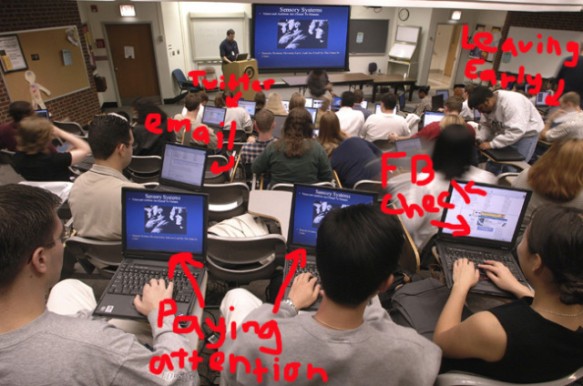 If you’ve been around the social media, new media sphere for a while, you probably know the name Clay Shirky. Perhaps best known for penning, “Here Comes Everybody: The Power of Organizing Without Organizations,” he is a Fellow at the Berkman Center for Internet and Society at Harvard, and was the Edward R. Murrow Visiting Lecturer at their Joan Shorenstein Center on the Press, Politics, and Public Policy in 2010. He holds a joint appointment at NYU, as an Associate Arts Professor at the Interactive Telecommunications Program (ITP) and as an Associate Professor in the Journalism Department. Shirky is about as authoritative and outspoken as they come regarding the power of new media–which makes his ban of technology in his classrooms all the more interesting.

In a lengthy essay in PBS’s Mediashift, Shirky writes about precisely why he imposed the ban. For one of new media’s greatest proponents, it wasn’t a an easy decision. For many years, Shirky wrote that the inclusion of technology–specifically laptops, tablets and phones–seemed organic, as the devices related directly to the topic at hand. But he said, “The level of distraction in my classes seemed to grow…The change seemed to correlate more with the rising ubiquity and utility of the devices themselves.” In other words, a 2002 Sidekick in the hands of the few was like a musket compared to a Galaxy S5 in everyone’s palm, an AK-47 of distraction-inducing firepower.

Point by point, Shirky highlights the perils of ubiquitous tech, especially in the classroom, and why he decided to ban, not just admonish, their use in his classrooms. He points the myth of multitasking–how it negatively impacts our productivity, our ability to retain information and ability to choose what to focus on.

He writes about the uncontrollable gravitation toward certain emotionally triggering content. As an example, he writes: “‘Your former lover tagged a photo you are in’ vs. ‘The Crimean War was the first conflict significantly affected by use of the telegraph.’ Spot the difference?” One has an immediate emotional payout, the other is more slow-release. The coupling of this content with images makes it doubly distracting. He writes:

Our visual and emotional systems are faster and more powerful than our intellect; we are given to automatic responses when either system receives stimulus, much less both. Asking a student to stay focused while she has alerts on is like asking a chess player to concentrate while rapping their knuckles with a ruler at unpredictable intervals.

In one section, he uses the metaphor of the elephant and the rider, where the emotions represent the elephant and our intellect the rider. Traditionally, the classroom’s focused environment allowed the deliberate rider–i.e. the intellect–to lead. But more and more, the emotional elephant, spurred by a thousand emotionally-gratifying prods from technology, is leading the way and isn’t quite sure where he’s going.

And lastly, he talks about the contagious effects of technology–how studies have shown that not only do people who overuse technology in class perform poorer, but so too do the people who sit near the over-user. It’s second-hand distraction.

The essay is highly informative for people in and outside the classroom. Technology is a many splendored thing, but it also has the capacity to wreak a great deal of havoc on our ability to focus and get stuff done and even enjoy life. We might all take a cue from Shirky and consider not just the potential of technology, but its actual effects on our daily lives. Sure, our phones and other devices can theoretically connect us to vast troves of useful and empowering information, but if we use them in practice to read about the top ten plastic surgery disasters, a lot of the theory’s potential is nullified.  More than anything, Shirky’s mandate has one very obvious implication: that we should put away our tech and tech with greater frequency and pay attention to the subject at hand.