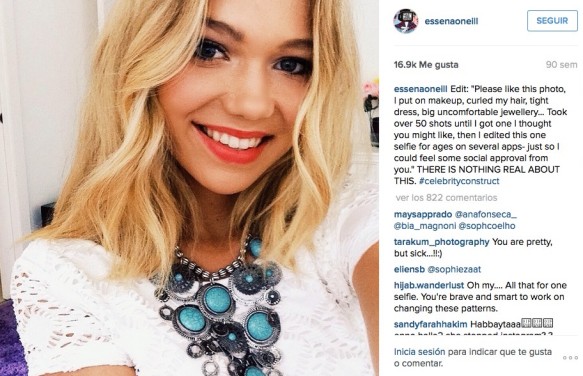 One of today’s most powerful advertising mediums is Instagram. Companies give tons of free products and pay handsome sums to have their products featured in highly trafficked Instagram account feeds. Until a few days ago, 19 year old Australian Essena O’Neil was a coveted Instagram model. Brands would give her stuff and pay her to show off their wares to her 600K Instagram followers. But then something happened. She took down nearly all of her Instagram pics, leaving a few with captions describing the true story behind the picture. Captions included, “I didn’t pay for the [pictured] dress, took countless photos trying to look hot for Instagram, the formal made me feel incredibly alone,” and, “Took over 50 shots until I got one I thought you might like, then I edited this one selfie for ages on several apps–just so I could feel some social approval from you.” 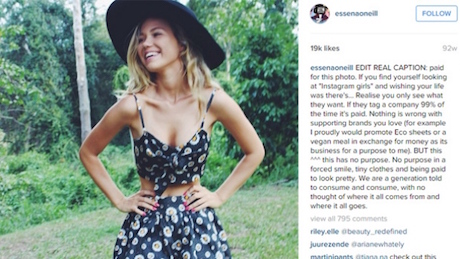 O’Neil has since removed virtually all trace of her social media life. She deleted her Instagram, Tumblr, Youtube and Snapchat accounts. She made several impassioned videos describing how miserable she was trying to live up to the ideal she was supposed to embody. She also started a new site called “Let’s be Gamechangers” meant to combat the malevolent influence of social media striving. There are a few other agenda items as well:

While some say the whole thing is a calculated stunt to get attention, I think it has the authentic messiness of a 19 year old who truly lost it and wants to affect change. To her detractors, she wrote, “This is about me feeling the need to constantly perfect and edit my life online…I’ve had these feelings about social media for ages and struggled with coming to grips with them.”

One of the biggest drivers of consumerism is advertising. Companies want to forge an association between the highly edited, staged ideals shown in ads and the products they’re selling. Happy, smiling people drink Coca Cola. Sexy, desired guys wear Axe Body Spray. But 9 times out of 10, there is zero causal relationship between the ideal shown and product sold. Coke will not make you happy. No amount of Axe Body Spray will make a guy attractive.

When I was researching this post, I ran across a video for an advertising advocacy group that envisioned a world without advertising and ad-fueled “information.” There would be no ads in Times Square. No posters on bus stops. No Instagram feeds. The producers were clearly trying to make it look like a bleak world–one without color, options and entertainment. But my main thought was, “Boy, that would be nice.” You could see buildings unmolested by billboards. Our cityscapes would be unmarred by ugly ads. People might look up from their phones and pay attention to the environment around them.

None of this is to say advertising as an entity should be banished. There are many useful products out there, and the companies that make those products need people to know their products exist for sale. But when advertisers imply that their humble products will lead to amazing things, it’s good to call them out and cry bollocks, which is exactly what O’Neil did.