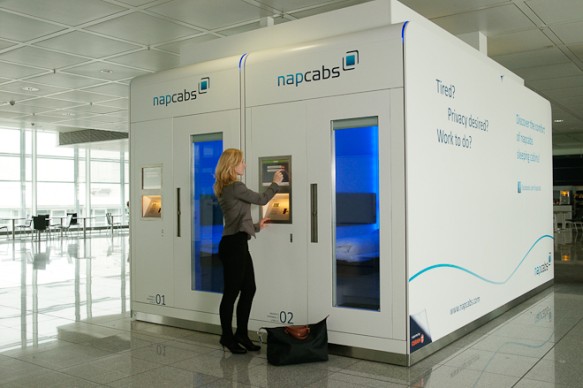 You have long layover or delayed flight. You’re super spent and want to sleep. You:

A few upstarts from around the world are tackling this issue of airport sleep deprivation with small sleeping cubes. While they haven’t exactly taken over the world (the 3 here are only in one airport each), they offer minimal sleeping quarters for the beleaguered traveler.

Napcabs (pictured above) is a German-based company with one outlet in the Munich airport (it had 2, but one is being serviced). It features a bed, soundproof walls, wifi, a multimedia screen with flight information and “anti-jetlag” lighting. Bedding is changed by an on-call cleaning staff.

At anywhere from 10-15€/hour, with a minimum 30€ charge, it’s not cheap, though consider if you’re flying overnight, this is a fraction of a hotel room’s cost. 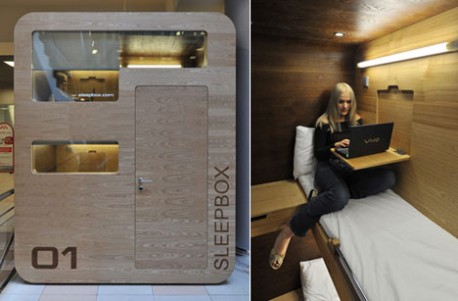 Sleepbox is in the Moscow airport and has very similar features as Napcabs. The one edge Sleepbox has is that it features 2 beds, not 1. According to Wikipedia, they charge $15USD/hour.

Wikipedia also said there are concerns about bed-bugs. Unlike Napcabs, Sleepbox does not explicitly say how linens are dealt with. I am hardly a germophobe, but this seems like a major oversight. A post in Treehugger.com indicates that they originally wanted to use an automated linen changing system, but instead opted for traditional linen. We imagine/hope they have some sanitary setup.

Sleepbox is smartly trying to position itself as a space maximizer for hostels. While airports are a great application, I could imagine these units as replacements for real hotels and hostels, particularly for people who just need a place to sleep. 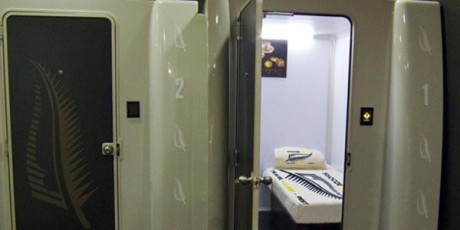 Snoozecube has 10 sleeping cubes set up in the Dubai airport. The company is from New Zealand, evidenced by the big fern leaf, similar to that of the All Black Rubgy team, emblazoned on their cubes and bedding. Like the others, they cost $16USD, are soundproof, offer wifi and connections to flight info. Their look is not quite as posh as the other 2, but the fact that they are clustered together in Dubai makes them like a makeshift hotel, which seems to make sense as you can have a standing staff and some isolation from the rest of the airport (something I think would be nice even if the cubes are soundproof).

High priced, hourly sleep cubes in airports might not be everyone’s bag. But similar to the Japanese sleeping pods we looked at a while back, these firms are showing an alternative to hotel rooms that feature more–and cost more–than most travelers would prefer.

Have you ever used any of these, or similar, sleeping boxes? What was your experience? We’d love to hear from you.