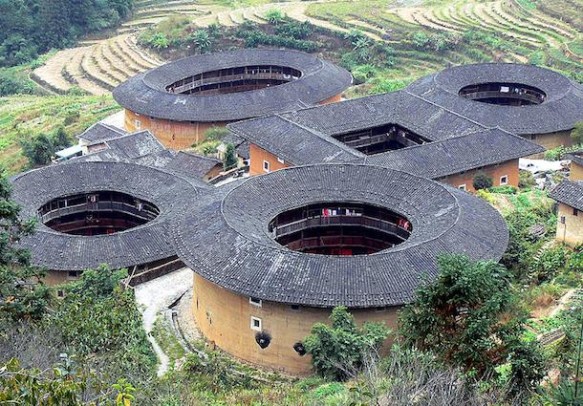 Long before adAPT NYC and SmartSpace’s 38 Harriet St in San Fran, there wers tulous, multi-unit Chinese buildings that wrote the book on compact, efficient living. Tulou translates to “earthen house” and are large, generally circular, fortress-like structures that were a popular form of building from the 12th through 20th Century (there are even a few present-day interpretations). While there are many types of tulou, the most popular form is the Fujian tulou; the Fujian provence has over 20K of them.

The walls of the Fujian tulou were traditionally made of packed earth and bamboo reeds, and rose up to five stories. The base, which often had granite boulders packed into its construction to make it dig-proof–was up to six feet thick. The wall thinned out toward the top to reduce load and allow windows for cross vent. The massive structure made it able to withstand earthquakes and frequent bandit attacks (a big problem back in the day).

The upper two or three levels contained houses that were made up of uniformly-sized housing units; they had multi-floor layouts and private staircases that lead from the ground floor to the top (basically townhouses sandwiched together). Each house contained a multi-generational family, and depending on the size of the tulou, up to 80 families or 800 people could live in one tolou. While we can’t say the exact sq footage of each house, we’re pretty sure they achieved a high person per square foot ratio.

The uniformity of design created a non-hierarchal structure. Wikipedia writes this:

Unlike other housing types around the world with architecture reflecting social hierarchy, Fujian Tulou exhibits its unique characteristic as a model of community housing for equals. All rooms were built the same size with the same grade of material, same exterior decoration, same style of windows and doors, and there was no “penthouse” for “higher echelons”; a small family owned a vertical set from ground floor to “penthouse” floor, while a larger family would own two or three vertical sets.

Toilets, wells and even surrounding agricultural land was all shared as well to keep the communitarian vibe consistent.

The result of all of this design is a structure that provided safe, wind-proof, cool-in-the-summer, warm-in-the-winter living. A total of 46 Fujian tulou sites have been designated as UNESCO World Heritage Sites; that organization calls them “exceptional examples of a building tradition and function exemplifying a particular type of communal living and defensive organization [in a] harmonious relationship with their environment.”

The idea of compact, efficient living is far more ancient than it is modern. It’s only in the last 60 years or so that humans have been able to cheaply make housing that exceeds their needs or make a house that could negate its surrounding environment with an HVAC system or live without the assistance of your neighbors.  Ancient architecture like tulous shows that the past can often hold key innovation for a more efficient, sustainable and interconnected future (sans bandits thank you very much).

Photos via UNESCO and Wikipedia Commons