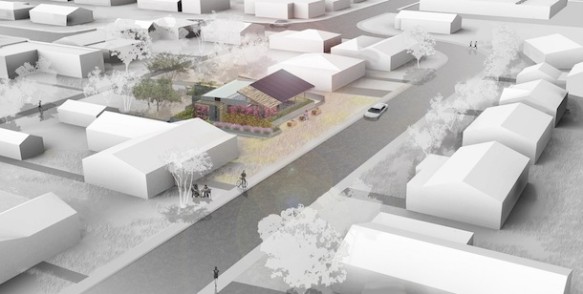 The Home of the Future is Transforming

On October 3rd, 20 teams of college students from around the world will descend upon Irvine, California for the Solar Decathlon. On display will be some of the most innovative designs in energy efficient home building. The US Department of Energy sponsored event is looking for “the team that best blends affordability, consumer appeal, and design excellence with optimal energy production and maximum efficiency.” Fixtures of the SD designs include PV panels, rainwater catchment and grey water systems–things that help the overall structures be as energy positive as possible. This year, a third of the teams are sporting another, less obvious, but equally important energy saver: transforming furniture.

Barth told us that when he approached some of the teams, not all had furniture selected. To us, this seems like a curious omission for a competition whose mission is to promote efficiency. SD’s guidelines dictate that the interiors of each structure be no smaller than 600 sq ft and no larger than 1000. The choice of furniture can make that 600 sq ft suitable for a family of four or, conversely, make the 1000 sq ft cramped for two.

It was also interesting to peruse many of the entries. Most were quite beautiful to look at and had ingenious strategies for energy production and retention. But many appeared to use the full 1000 sq ft interior limit as well as much of the 4680 sq ft lot space. Many of the team’s renderings showed their home designs sitting in far off fields or in the middle of the desert, leading us to wonder how rigorously setting was considered? As Lloyd Alter stated in Treehugger recently, “When it comes to green building, where you are is as important as what you build.” How do these homes fit into an increasingly urbanized, interdependent world population? A world with depleted natural resources? Is the Solar Decathlon looking for the home of the future or the suburban home of the future?

One of the cooler designs is called DALE, designed by the Southern California Institute of Architecture and California Institute of Technology team. It uses housing modules that can be expanded with shifting occupancy needs–e.g. couple to family to extended family. Check out the video above for an illustration (you can cut to the 1:00 mark for the juicy parts).

Our high-density-biased gripes notwithstanding, there are some very cool designs on display at the Solar Decathlon. And we hope the inclusion of more transforming furniture indicates a level of holistic design that includes interior functionality and setting as much as it does a home’s raw energy consumption.