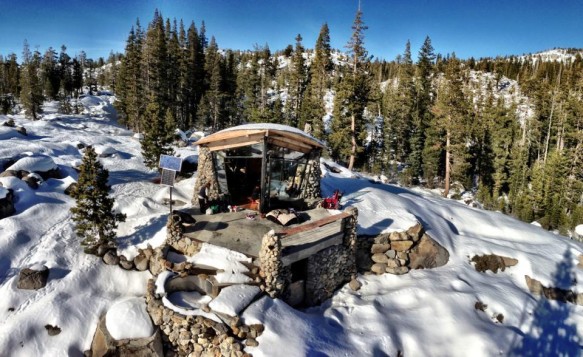 A couple decades ago, snowboarder Mike Basich did what few are able to: he went pro, actually making a good living doing what he loved most. Pulling in around $170K year, he did what any protagonist in an American success story would do. He bought a big house (4K sq ft) and a fancy car. But as success mounted, as the purity of his sport became tainted by speciously-sourced money, Basich found that success wasn’t all it was cracked up to be. He quit the sport, became a photographer and started living his truth. The architectural manifestation of that latter pursuit is a 228 sq ft off-grid cabin in Soda Springs, CA.

The cabin, dubbed Area 241, took Basich five years to construct. He laid the 175 tons of stone for its walls himself and hand mixed cement with water ported from a nearby stream. All the timber is Douglas Fir he harvested from his 40 acre property.

Water comes from snowmelt and streams. Power is solar and cooking and heating are handled by a small wood-burning stove. Lest the place seem too spartan, Basich built a hot-tub and a private chairlift on the property.

The house is pentagon shaped and its proportions are based on the golden ratio, which he says is supposed to better make the space fit the body.

This author tends to be a little leery of off-grid spaces. Oftentimes, they can only be accessed and supported via long journeys in internal combustion vehicles (it looks like Basich gets to his via snowmobile in the winter and we’d guess an offroad vehicle in warmer days). A trip to the grocery store might be a three hour round trip. And how useful are places like this in the context of housing the world’s 7B people?

Those prejudices aside, this place is so badass and I want one like it so bad. It looks like an amazing place and an amazing way of life, rising and resting with the sun, living as one with nature. I’m totally jealous.