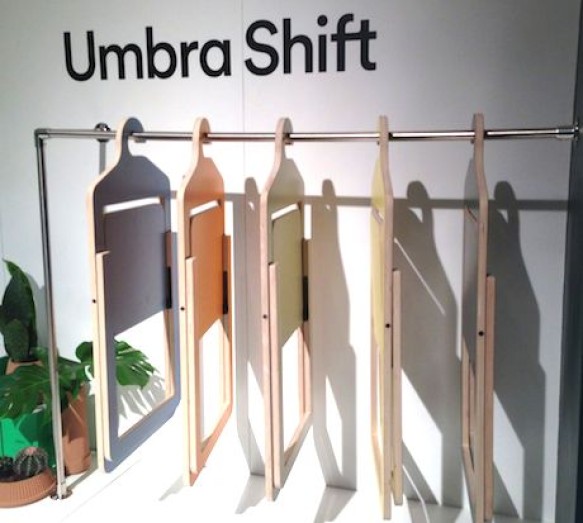 As I walked down W 35th Street in Manhattan, en route to the Jacob Javitz Center for this year’s International Contemporary Furniture Fair (ICFF), I tried not to be resigned. I tried to not let the memory of past years cloud me from seeing something new and interesting. I tried not pigeonhole high-end furniture makers as people largely catering to customers with unlimited cash and space. I tried to imagine the emergence of a vanguard of furniture makers–they would see their furniture as part of a larger world; a world with an imperative (a moral one no less) to replace excess and ostentation with restraint, modesty and efficiency; this maverick cohort would make furniture that could do as much as it could in as little space as possible. Try as I might, I could not will these things into being.

I’m the problem really. I went in with unrealistic expectations. ICFF is, at its heart, a furniture show for high-end, often “bespoke” stuff (last time this author will use the word “bespoke” on this site). And the fact is–at least judging from the show’s offerings–high-end customers aren’t too concerned about how to fit two bedrooms and a desk in 500 sq ft…unless, perhaps, it’s for their pied-à-terres or nanny apartment.

While there were a few of the usual small-space suspects at the show like Resource Furniture, Urbio and Amina Invisible Speakers, for the most part, there was very little in the way of interesting small-space furniture on display. Here are a few exceptions. 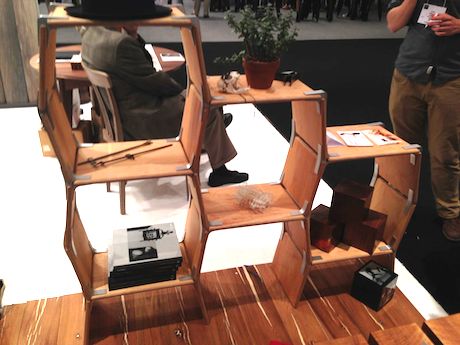 We’ve looked at this Brooklyn-based maker in the past. Their Modos system (used to be called Snugit) allows you to resize and reconfigure furniture without tools (okay, you might need to saw some wood). Given how often people move nowadays, the need for lightweight, reconfigurable furniture is great. Check out their Kickstarter campaign as well. 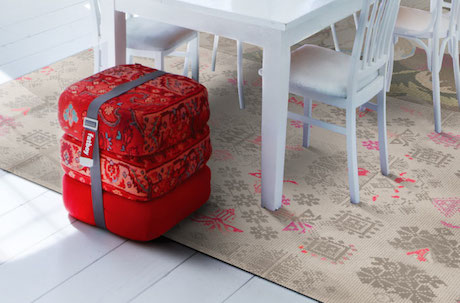 Fatboy is known for their square-shaped, oversized beanbag chairs. They are easy to spot due to their large, red Fatboy labels. I have sat on these and don’t find them too comfortable. But the company makes other stuff, like the Baboesjka (pictured above). It is a cushion/stool, where three individual cushions are strapped together. The cushions can be used together or apart and each can be ordered in its own color. These would be really handy for folks (like me) who like to sit on the floor, and for folks who have two or three friends who enjoy doing the same (bet they’d be very popular with Bedouins). While theoretically you could make something like this with three firm pillows and plus-sized-men’s belt, for $260, we think the Baboesjka makes the whole assembly a lot more foolproof. (I had to rip the picture from their site because my son was attacking an inflatable poodle in their booth). 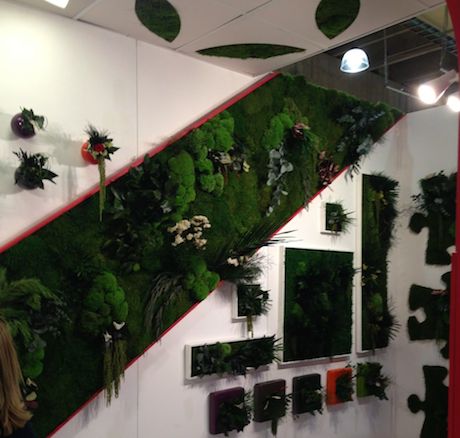 As someone cursed with a black thumb and love of greenery, I was really excited by Flowerbox. Unlike all those wall gardens that require watering and light and attention, Flowerbox offers lush, green walls made of moss that they claim will do without light and water for five years! Even I could maintain that (though I can’t guarantee there’d be a year six). They offer standard sized, preconfigured panels as well as custom pieces, both of which are shippable within the tri-state area. 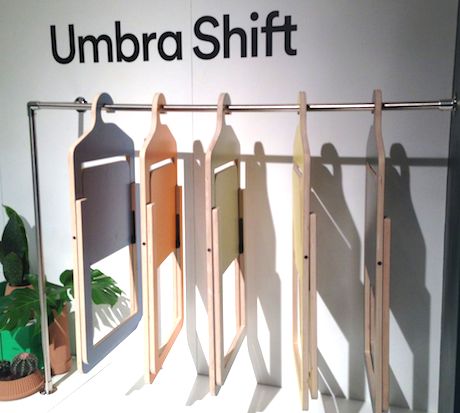 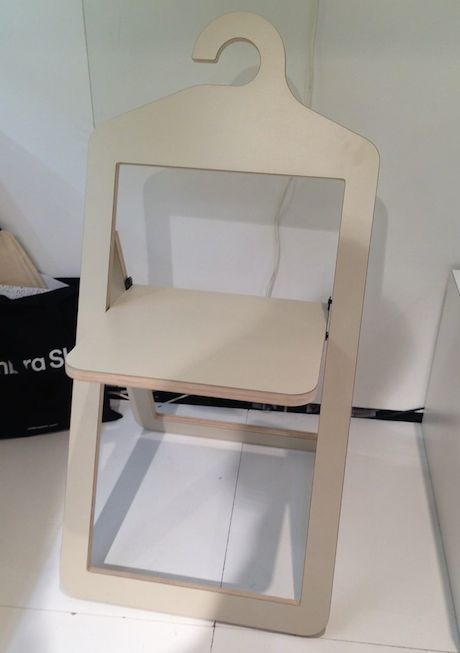 Umbra Shift is the skunkworks of houseware and furniture giant Umbra. They carry this hanging chair, which will retail for $250. Their representive claimed is could support up to 700 lbs–you could stack five normal sized guests on one, further cutting down on space usage. It’s not super pretty to look at whilst unfolded and not that comfortable to sit in, but it will stash away nicely in your closet. 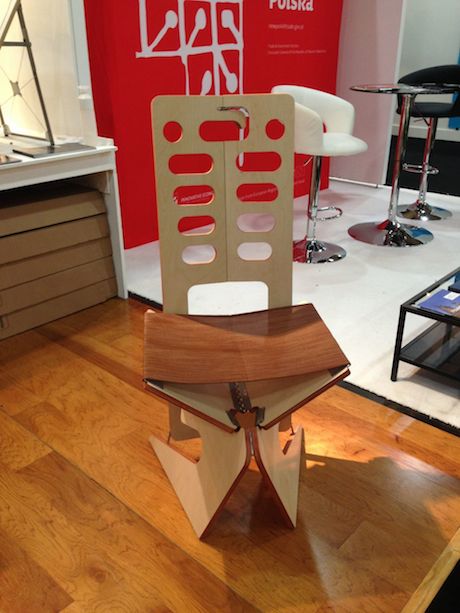 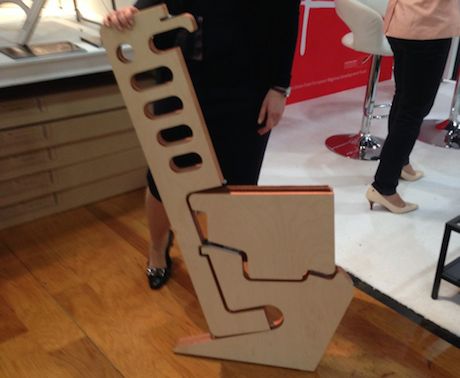 You gotta hand it to Folditure, they can make some compact furniture. They just released a new chair called the Maya due to its resemblance to Mayan iconography. When compacted, it’s only 1.25″ wide and can be hung in a closet. I sat in it and found it quite comfortable. The styling, shall we say (and as we’ve said) will appeal to a very particular buyer. 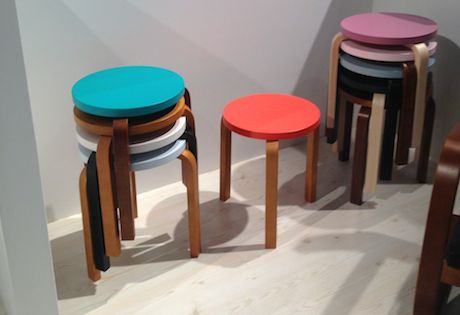 These stools by Artek have been around for a while. No matter, they’re still super hot. They work as stools or as tables or…well just those two things, but still, those are useful thing. They stack nicely and their colors would make great accents without being overly flashy. They cost around $300. Each. I’d buy em if I could.

Forgive me if all of this seems a bit cynical. The truth is, there was a wealth of beautiful furniture at the show (most of which was probably too nice for this English-majored author’s eyes to appreciate), and I’m sure I missed many great space-saving items whilst making my laps of the aisles. Yet I couldn’t shake the feeling that there weren’t many risks being taken–that most of the furniture, though beautiful and demonstrating amazing craftsmanship, was pretty old guard fare.

Furniture has a huge impact on how a home functions. It can crowd out or open up a space. It can eliminate rooms that are seldom needed. It can make spaces function in two or three or four ways, allowing people to live in smaller homes than they might have thought, saving hundreds of thousands of dollars. We hope that in the future, there will be more furniture makers who comprehend these opportunities and direct their talents towards not only making rooms beautiful, but making them work.