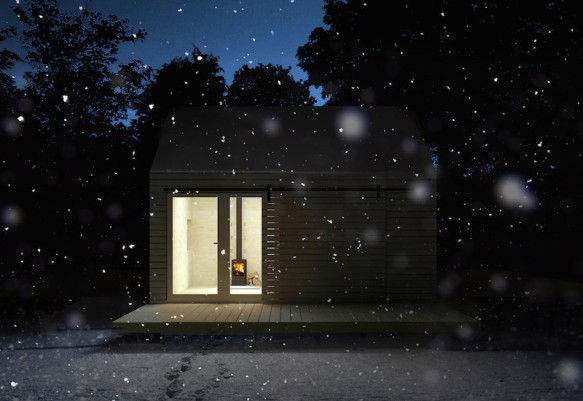 Many of the less-handy small-dwelling aficionados among us look in awe at people who construct their own tiny houses. We relate better to Christopher Smith in the Tiny movie with his yearlong series of construction mishaps far more than super humans like Stefan Cook who builds an awesome tiny house made from salvaged materials. Building homes seems like really hard stuff (firsthand exposure to the process verifies this), which is why the WikiHouse idea holds a ton of appeal.

WikiHouse, according to their website “is an open source construction system. A design commons for high-performance, low-energy homes that can be customised, printed and self-assembled.” Basically download the plans, send the CAD files to a lumber yard with a CNC cutter, pick up the lumber, construct the house. The pieces are mostly press fit, requiring little more than a mallet to construct.

Right now, WikiHouse doesn’t have a ton of plans to share. The one plan available to download is a bare-bones, 124 sq ft studio (rendering at top), that they claim can be built in a few days with a few amateur builders. If you don’t want to source the materials and CNC cutter, you can purchase the materials from them for £15,500 (US$24K), and for another £2K ($3K), they’ll put it together.

Last summer on this side of the Atlantic, Peter Hirsch, a graduate student at the School of Forestry & Environmental Studies (F&ES), put together his own WikiHouse. Like WikiHouse suggested, the actual construction only took a couple days, helped along by a few friends, though high humidity made some of the plywood warp, causing some construction issues.

While the idea still appears to be more promise than viable alternative to traditional housing, and the company’s prices seem a little steep, it’s a good and big idea nevertheless. When entertaining the notion of making your own home, labor and soundness of design are huge considerations. By providing simple, proven, easy-to-assemble designs, WikiHouse might eventually help make smart housing more accessible to more people.