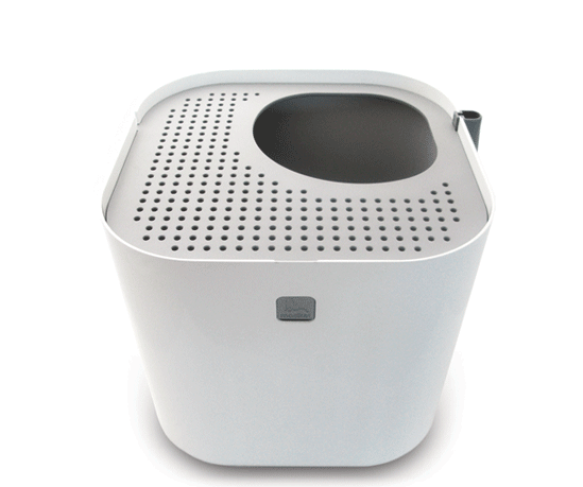 Cats are one of the most edited pets. They’re compact. Most don’t need to be let outside. They tend to be very self-sufficient (try leaving a dog or even a fish unattended for a few days). And the main piece of hardware they require is a litter box. In a small space, finding a box that is not a visual or olfactory blight can be a challenge. A company called Modkat thinks they have met that challenge.

Visually, the Modkat is an unobtrusive 16″ cube. It features a removable tarp-like liner and scoop that hangs from a notch on the rim of box. Besides its clean aesthetics, the main difference between it and most tub-like boxes is cats enter from the top. The design is meant to reduce the amount of litter that trails the cat, as gravity takes it as he jumps out. 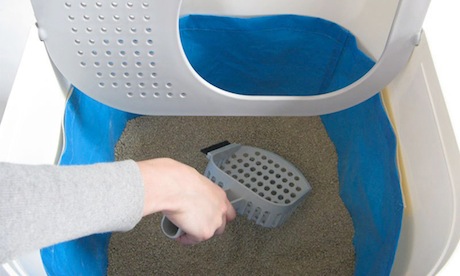 This author has been using the Modkat for the last couple years. Overall, I am quite happy with it. It has a number of things going for it. First, I like the way it looks. Most litter boxes, particularly the covered ones and self-cleaning ones, are ugly and cheap looking. The Modkat is made of high quality plastic and its unadorned and simple lines make it compatible with most any décor. It’s not particularly small, but if it were any smaller, a cat wouldn’t comfortably fit in it. I’ve seen attractive cabinet-style litter boxes, but these tend to be expensive, big and I’ve heard that the cabinet’s wood absorbs odor.

Which leads me to another plus for the Modkat: It doesn’t smell. Perhaps it’s the lid, but the odor is barely noticeable, even when I’ve been less than diligent about changing the litter (we use non-clumping litter, though ModKat recommends clumping). This is a huge plus in a small space, where you might be close to the box no matter where you sit.

Lastly, the opening in the top is easy for entry and exit for lithe and not-so-lithe cats alike. Lifting the top for cleaning is very easy as well. The design “helps” control the outpouring of litter, though some invariably escapes–this has been true with both clumping and non-clumping litter (it is infinitely better than our previous tub-style box).

In terms of drawbacks, I haven’t found the replaceable liner particularly useful. It gets funked up very quickly and it’s not the type of thing I want to wash in the kitchen sink. Like I mentioned, the litter still escapes when the cat does. And for a big hunk of plastic, $144 is a little steep (and this is the sale price. Normally retails for $180). That said, on a cost-per-use basis, it’s extremely cheap, and considering it’s something my wife and I see every day, paying a bit extra for something that looks and performs a lot better than standard fare is pretty worth it.

You can order a Modkat direct on their website.