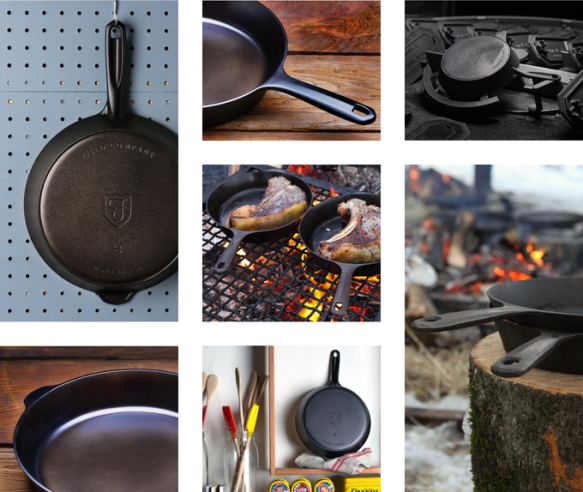 While the world can’t seem to get enough gadgets–smartwatches, fitness trackers, posture regulators–there’s a lot to be said for basic stuff done right. And few items are as basic as cast iron skillets. They distribute heat perfectly. A well seasoned one gives near stick free performance without you daily dose of vitamin T (Teflon). But cast iron skillets are heavy and some have rough cooking surfaces that make them less stick resistant and harder to clean. A Kickstarter project called the Field Skillet setting about addressing some of these issues in pursuit of crafting the ultimate cast iron skillet.

The Field Skillet is a svelte (for cast iron) 4.5 lbs–lighter than a 13” Macbook Pro. The makers say it’s the minimum weight they could make it while retaining the heat distribution properties that make cast iron so loved as a cooking tool. Part of the weight savings is attributable to the fact that it’s been polished and machined to have a smooth surface, which improves cooking performance and makes cleaning a breeze. They say the pans will come pre-seasoned and pass the fried egg test.

The 10.5” outer diameter and 9” cook surface is designed to be big enough for most purposes, but not so big as to crowd out other burners. The skillet is made in the US out of 75-90% recycled iron and carries a lifetime warranty (not sure what could go wrong with a cast iron skillet, but can’t hurt we suppose).

We could go on about its features, but at its heart, the Field Skillet is a simple tool designed and made as well as it possibly can be. It’s a formula that seems to work very well on Kickstarter. Field Company, they firm behind the project, set out with a $30K goal to start up production. As of this writing, they’ve raised $1.4M. You can still order one of their skillets for a $90 pledge. Delivery is projected for next January. Visit their campaign page for more info.