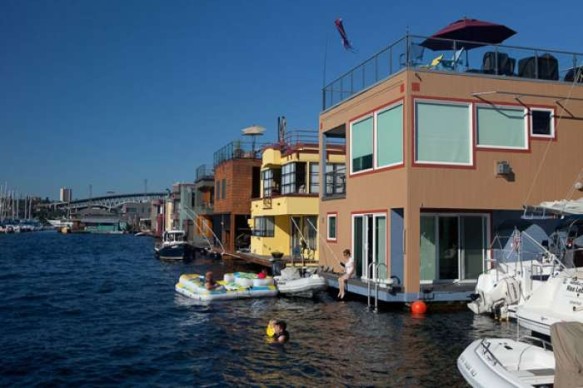 Hope, and Homes, Float with Houseboats

On this site we’ve heard tales of folks trading in their landlubber homes for sail and motorboat-based living. But most boats weren’t made to be inhabited fulltime–even we have to admit that living out of a 50 sq ft cabin might get oppressive. Houseboats, aka “floating homes” (a more succinct term), are another story. They are normally not boats that become homes, but rather homes that happen to be boats, or at least float.

Houseboats are found anywhere there’s a lot of watery real estate. We would consider them “edited” housing because, even though there are no size restrictions (look at cruise ships), they lean toward compact dimensions and efficient design. Limited mooring space, boat-based hulls and the practical realities of maintaining what is, for all intents and purposes, a boat, favor keeping things compact and shipshape. The below video of Tracy Metro’s 1975 Harbor Master houseboat is a nice example of that.

While there are active houseboat communities in places like Sausalito, Portland and British Columbia, the most popular spot for floating homes in the North America is Seattle (helped a lot by Tom Hanks and Meg Ryan). The city once boasted several thousand houseboats, which started off as crude housing for lumberjacks and seaside workers in the early 20th Century. According to the Seattle Floating Home Association (SFH), the Great Depression spurred a golden age for houseboat building and occupancy:

The real explosion of houseboats started in the 1930’s when people, desperately seeking cheap places to live, collected old cedar logs and debris floating around the lakes and fashioned themselves “temporary” quarters to last out the depression. The vast majority of the historic houseboats still floating today are from this period.

The following 70 years were not so kind to the houseboat. As the economy rallied, people moved back ashore. The houseboat holdouts were considered countercultural types and became unpopular with the city, who wanted to replace the houseboats and their inhabitants with over-the-water apartments and businesses (none of this was helped by a lack of proper sewage until the 1960s).

After a few decades of battles between houseboaters, the city and moorage owners, the Seattle houseboat community now has rights and a proper infrastructure. There are around 500 houseboats in Seattle, all located on Lake Union and Portage Bay. A recently opened exhibit at Seattles Museum of History and Industry (MOHAI) called “Still Afloat: Seattle’s Floating Homes,” celebrates the past and present of this quirky dwelling type.

Europe boasts a number of actively-lived-in houseboats as well (i.e. not recreational ones, which are plentiful). In the UK “narrowboat” houseboats–often only 7′ wide–float along the banks of the country’s inner canals. Other countries like Holland, France, Germany and Belgium have similar, canal-based, narrow barge houseboats. These housing types are becoming increasingly rare as the cost of mooring increases.

Moving beyond associations with boats, Holland is looking toward floating homes as a rising-sea level-proof housing solution. In fact, there is a whole school of floating architecture arising out of the need to future proof that elevation-deprived country. One of the more notable names is Waterstudios, which has created a number of structures for countries like Holland and the Maldives, that are particularly threatened by sea level change.

Whether motivated by hard times during the Depression or a precarious environmental pattern, they show how necessity is the mother of invention. Rather than being a hindrance to innovation, the restrictions inherent in houseboats, like other compact housing, seem to it.

images via MOHAI and Waterstudios