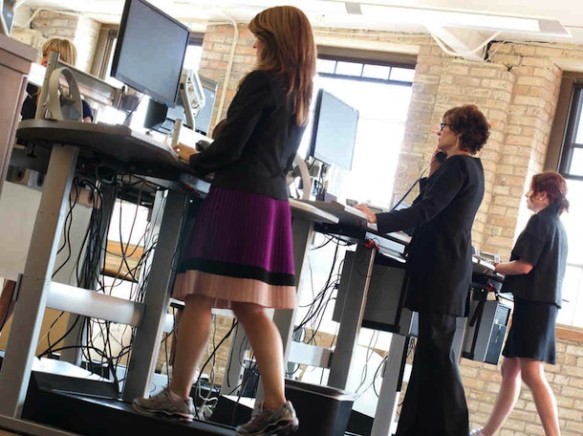 Fidget Your Way to a Leaner, Longer Life

If you there was a simple, minimal-effort action that took ten minutes once an hour to do, one that added two years to your life, prevented several major diseases and kept you trim without any diet modifications, would you do it? As you might have gathered from the title of this post, there is an action, or rather actions and they are standing and/or fidgeting. A segment on NBC’s Rock Center news program that interviewed Mayo Clinic obesity expert Dr James Levine explained the myriad health dangers posed by remaining sedentary too long and the benefits of constant movement.

Visit NBCNews.com for breaking news, world news, and news about the economy

Of the dangers, Levine says prolonged inactivity leads to reduction in insulin effectiveness, an increased chance of developing Type 2 diabetes and even fat and cholesterol levels rise.

Unfortunately, all-day sedentariness is an equal opportunity killer, affecting everyone from couch potatoes to ultra-marathoners, as Levine explains:

Being sedentary for nine hours a day at the office is bad for your health whether you go home and watch television afterwards or hit the gym. It is bad whether you are morbidly obese or marathon-runner thin. It appears that what is critical and maybe even more important than going to the gym, is breaking up that sitting time.

Last year, we read how people who sat less than three hours a day lived on average two years longer than their seated counterparts and how sedentary behavior increases risk of certain cancers. This segment and Levine’s testimonial–given during an interview conducted on a treadmill–just provides more reasons to stand up for your health.

While sitting is an easy thing to blame for poor health, it doesn’t tell the full story. The segment show that it’s inactivity–seated or standing–that is the real enemy. To demonstrate this, the segment followed three women–the news anchor, a tv producer and a restaurant manager–and monitored their movements via sensors for a 24 hour period, including a workday. Interestingly, the tv producer, who thought she spent too much time at her desk in front of a monitor, was more active than the restaurant manager, who spent her workdays standing. The producer’s activity was attributed to constant fidgeting–crossing legs, going to the trashcan, etc. Meanwhile, the heavier set restaurant manager, while standing all day, showed lower intensity of activity. This lends itself to Levine’s finding that shows lean people tend to be active 2.5 hours more a day than obese people (though the restaurant manager was far from obese).

The segment does acknowledge the role genetics and diet play in keeping people thin, but it also makes the fairly universal claim that sitting and remaining sedentary shuts down our metabolism, or as Levine says, it “is like sort of owning a really cool sports car and letting it idle all day long.”

What to do? Levine would certainly recommend one of his treadmill desks, which keeps you constantly on the move. We’re not sure if this contraption is ideal for micro-apartments, so we might suggest a standing desk instead. Another one of his suggestions is to spend at least ten minutes of every hour not sitting and active. And we might add that when you are sitting, don’t be afraid to fidget.