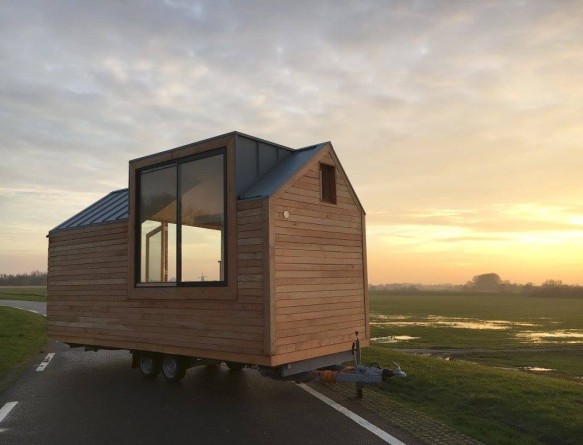 Call us a bit jaded, but after a while many tiny houses start to look alike: tiny gable-roofed structures with eaves and a porch, lots of rustic wood, a loft bed, composting toilet. This is all fine, good and functional, but it can also feel somewhat generic and leave those whose tastes lean modern a little wanting. We ran across this tiny house on Treehugger by a Dutch outfit that calls themselves Woonpioniers. Yes, their “Porta Palace”, as they call it, is still made of wood and has a gabled roof (albeit an asymmetrical one), loft bed and composting toilet, but its sleek and clean design give it an overall effect that is very removed from Laura Ingalls and her houses on prairies. 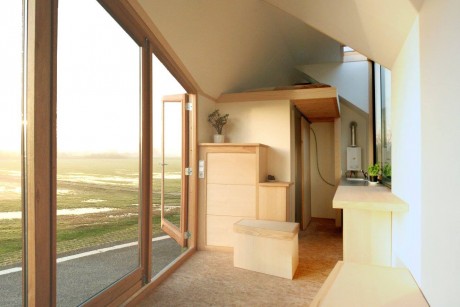 The first distinguishing trait are windows: two huge ones on either side, one of which contains a big door, making the transition from in and outdoors somewhat fuzzy. While giving it a dramatic look and tons of light, it would also pose some serious privacy issues if the Porta Palace were placed in a group setting.

There’s not much to the space that can’t be seen: there’s a living room with integrated sofa that faces out one of the large windows; there’s a sleeping loft that’s accessed via stairs that are also storage boxes; that loft sits above a bathroom where the requisite composting toilet resides; and there’s a small (I guess that goes without saying) galley kitchen. Everything has a unified aesthetic, making it look like a pleasant place to hang out. 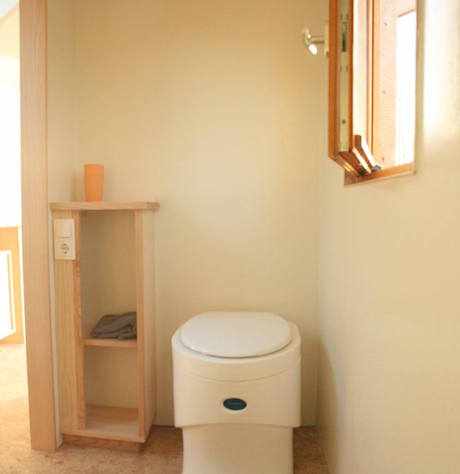 The project seems to be an experiment in low cost, low impact living (Woon means “living,” not wood as I initially assumed) and one its architects, Jelte Glas, will conducting that experiment upon itself, living in it full time. As much as anything, the Porta Palace shows the infinite forms tiny housing can take. See more on Treehugger and the Woonpioneers website.