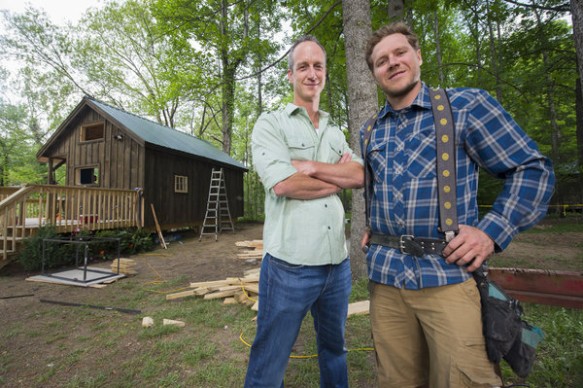 The trailer wheels on the bottom of tiny houses must be getting some decent traction in the American consciousness. First, they got their own movie, and now they have their own TV show. Last night was the premier episode of “Tiny House Nation,” a reality tv show on A & E’s new FYI network.

The show is about people in the process of downsizing and adopting the tiny lifestyle. The first episode tracked Jeff, Chelsea and their 2.5 year old daughter Lily-Grace, a Tennesseean family who have decided to exchange their 1300 sq ft suburban home for a 172 sq ft tiny house. The show is hosted by actor John Weisbarth and contractor Zack Giffin–the former does most of the story telling, the latter builds and designs the house.

The episode’s drama revolves around the seven day timeline in which the shell of the house must be built out and in which the family must get rid of all the stuff that won’t fit in their new place (i.e. most everything). The show gives a frank, but not condescending view of what it takes to live in such a small place. In one scene, Jeff and Chelsea are given a small roped off area that represents their new home’s total area and a few bins that represent the total amount of storage (only 20 cubic ft, which seems a bit low). They must then excise many of their possessions to get to what fits. Jeff had to get rid of his novelty silk suit and Chelsea had enough shirts to occupy all of her storage. As someone who downsized recently, their situation seemed all too familiar.

The show spent a fair amount of time focusing on the design needs and the challenges of fitting everything into such a small space: how to fit an adequate sleeping and play space for their daughter, how to fit a working kitchen in the space, dealing with miscellaneous construction issues, etc. 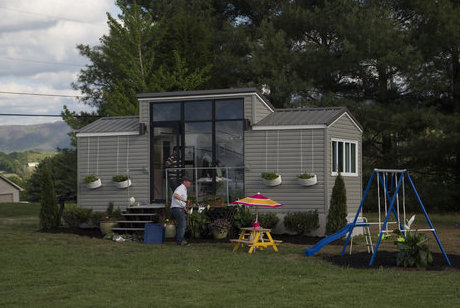 Toward the end of the hourlong show, the tiny house is completed. It has a full kitchen, a nifty table that folds down from the wall, a small lofted play area with a mural for Lily-Grace, a dedicated bedroom for the adults and bathroom with a composting toilet. The design used a large bank of windows and glass front door on one side of the house, which gives the space a light and airy feel. It would be tough to call the house spacious. The place is damn small. Jeff and Chelsea, at least for the camera, take the small size in stride (they also see the home as something that will work while Jeff is in school and their daughter is small).

The show also took a detour to New York City, where it talked to Graham Hill and toured the LifeEdited Apartment (note: neither Graham nor LifeEdited were paid any amount for this appearance or the promotion of the show).

The most notable thing about the show is its treatment of tiny living as a valid way of life. Jeff and Chelsea must confront real issues in downsizing, but the show is quick to elucidate the benefits of this way of life: greater mobility, being mortgage free, more communication and so on. One of the greatest remarks came from Jeff, who said that at first getting rid of stuff was stressful, but that stress was later replaced by the stress of having stuff. He said, “The giving up process is a short term issue, but once you go through it, you have more longterm happiness.” Delivering the message that living with less can be freeing is refreshing in a television landscape that includes “Keeping Up with the Kardashians” and “Rich Kids of Beverly Hills.” I’m looking forward to future episodes.

The show airs 10pm EST on the FYI network. It’s also available to stream on the FYI site.