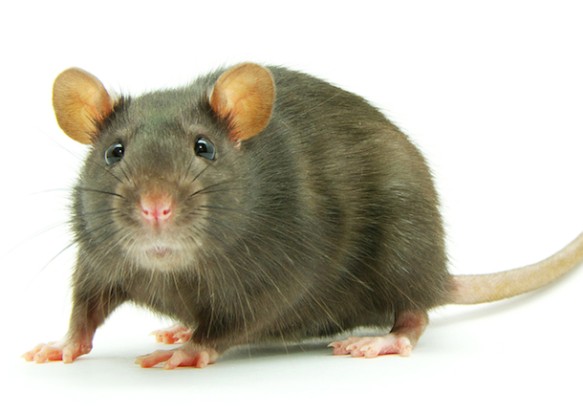 The Dead Rat in the Living Room

Several years ago, I was renting a place owned by a hoarder. There was a ton of furniture, clothes and ephemera scattered about the place. One day, amidst all the junk, I noticed a distinctly rat-corpse-like form on the floor. Its guts were oozing out of its stomach.

I’m not particularly squeamish, but this freaked me out.  Rats are dangerous–especially ones with oozing entrails, a condition I reckoned must have come about from a highly-communicable disease or parasite. Perhaps it was eaten by some cannibalistic rat still on the loose.

I didn’t know what to do. I didn’t want to wait for animal control to come by. I wanted it out of my house ASAP. I knew I had to deal with it, which proved challenging considering I couldn’t look at it, much less handle it.

Nevertheless, my fear of dealing with it was trumped by my desire to be rid of it. I put on full-fingered mountain bike gloves and grabbed a large stainless steel kitchen bowl. With eyes averted, I slapped the bowl on top of the rat. I quickly scurried away, pulse high, breathing short. At least I didn’t have to look at it anymore.

I worked up the courage to approach it again. I got a magazine and slid it under the bowl to scoop the corpse up. Fortunately, it didn’t stick to the floor, nor was it moving. Part of my fear was that this was a zombie rat—half-alive, ravenous for human flesh.

The rat was now trapped between the bowl and the magazine, but I still had to deposit it in the garbage, which would require lifting the bowl and looking at it. I thought about doing the whole operation with eyes closed or blindfolded, but the prospect of missing the garbage and picking it up again was too much to deal with.

I brought the trash can near the bowl and took a few deep breaths. With half-averted eyes, I grabbed the magazine and bowl.

As I lifted the bowl and the rat came into view, I noticed some strange details. First, the blood hadn’t smeared on the magazine. Since the guts were still bloody, it should have left a trail. Next, there was a distinct lack of detail to the rat’s entrails; it was more of a general mess than an exposed anatomy with intestines, kidneys and other organs.

The reason for these strange details was that the rat wasn’t real.  It was rubber. A buddy of mine who was staying over had put it there as a joke that morning.

I took away a few important lessons from this experience.

At LifeEdited we tend to place a lot of focus on streamlining lives via architecture, design and technology. This, we believe, is a worthwhile pursuit. But for most humans, fear and anxiety are bigger time-drains than bad design (which is not to dismiss the importance of the latter discipline). What’s the point of having the most tricked out micro-apartment, whose interior is co-designed by Dieter Rams and Jonny Ives, if you spend your life fearing fake–or even real–rats?

Today, consider questioning your fears. Are they based in fact? If not, why do you have them? If so, what good will not dealing with them do? Remember, there are few better ways of editing your life than dealing with the things you least want to deal with.