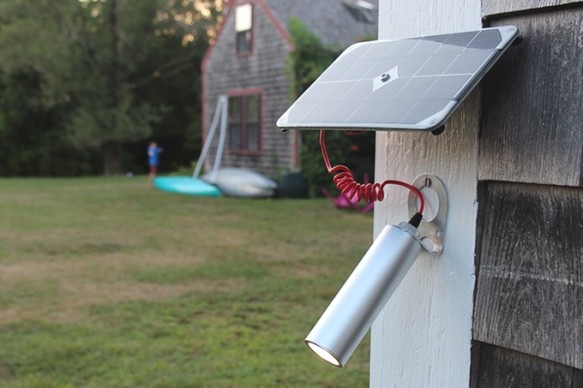 A couple years ago, we featured a prototype lighting system made by Voltaic Systems that was installed in the LifeEdited apartment. The light featured a CNC machined aluminum body and a bright, adjustable LED bulb. Since Voltaic’s main business is portable solar charging systems, the dangling light was connected to a ceiling receptacle that was connected to battery packs stored in a cabinet. Those batteries were connected to a small array of photovoltaic panels installed right outside one of the apartment’s windows (the batteries could also charge portable devices). While making a nifty and functional light for the apartment, the lighting system was ultimately designed to be a versatile light source that could be used and charged in any conditions.

For the last few years Voltaic Systems has been tweaking and refining the design and now they have launched a Kickstarter campaign to fund production. Dubbed Shine, the new system retains an adjustable LED bulb and sleek aluminum construction. Unlike the prototype, the production unit is 100% waterproof and its battery is stored inside the shaft. The battery can be charged via USB or an 8.27” x 4.45” solar panel. The battery is good enough to power the light for 31.5 hours in low and 7.5 hour in high modes. You can also plug a smartphone into the battery and it acts as an auxiliary charger. 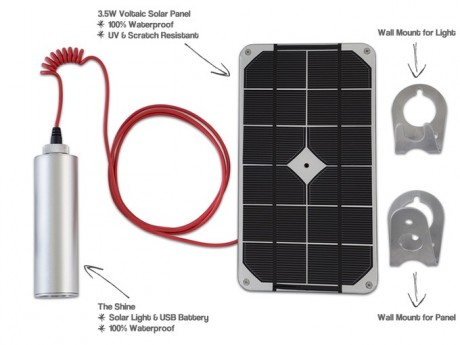 The system has countless applications. It makes an amazing camping light or light for an off-grid cabin or for some spot in your home far from an outlet. But perhaps Shine’s best applications are in less ideal scenarios, such as emergencies like Hurricanes when power goes out. It can also be indispensible for the 1.3 billion people across the globe that live without access to electricity in their homes, many of whom rely on hazardous substances such as biomass to light their homes. The World Bank estimates that 780 million women and children inhale smoke which is the equivalent to smoking two packs of cigarettes every day from the smoke from these substances create when burned. Voltaic Solaire has partnered up with the nonprofit Fabretto to deliver their lights to several regions of Nicaragua who fall into this category.

Shine seems to be a hit, evidenced by the fact that it met its funding goals about a day after their campaign launched. For a pledge of $39 you get the light itself; for $66 you get the light and solar charger; and for $109 you can get the light, solar charger and Voltaic will send a system to a Nicaraguan family in need (there are other pledge amounts as well). Units are expected to ship January 2016. Even if you don’t have an altruistic bone in your body, the Shine is an awesome, perhaps indispensable item to have around. As they say in their campaign, “Useful everyday, essential one day.” Visit their Kickstarter page to pick one up or for more info.