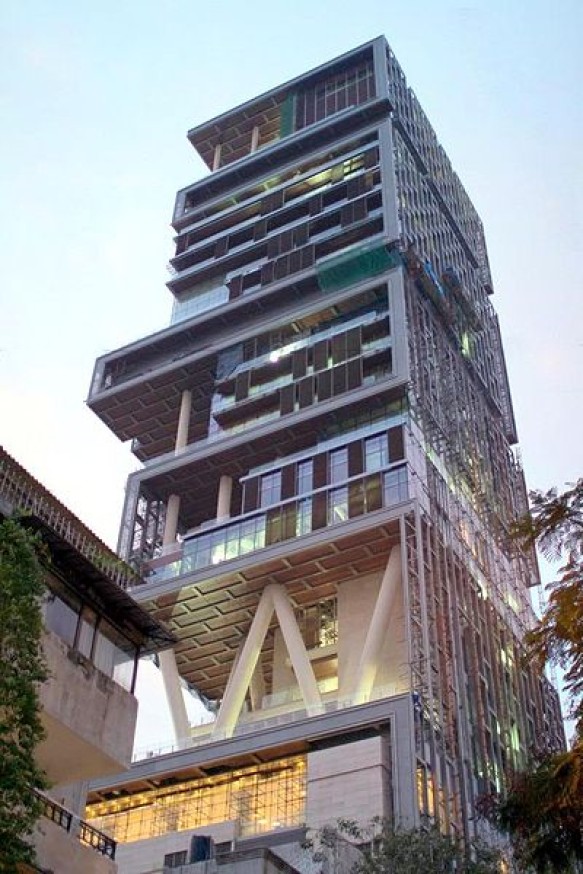 A: Antilia, the world’s largest, most expensive single-family residence.

Antilia was the vision of Nita and Mukesh Ambani–the couple at the helm of India’s richest family. In a country where the majority of citizens subsist on less than $2/day, in a city that is often called “Slumbai”, the couple wanted to build their own “Taj Mahal of 21st Century India” (seems more like a Graceland to us). If size doesn’t impress, check out these features:

Perhaps the best part is that the Ambani’s may not even be living in the joint. Vastu Shastra–basically Vedic Feng Shui–says there are not enough windows on the eastern face of the building to greet the morning sun. According to the Daily Mail UK, the family is still slogging it away in their old dump–a 14 story tower.

But watch out Ambani’s. Another mega-rich Indian family, the Jones’, we mean the Singhanias, are close on your heels with their JK house (no, we’re not kidding). While 30 m shorter, it boasts an Antilia-beating museum and 2 pools (Antilia has 1 pool and no museums…pathetic).

While these homes might seem absurd, they can also be viewed as natural extensions of the mindset that if you can build bigger, you do–a mindset that best represented itself on these shores with the McMansion.

Hopefully, these architectural monstrosities represent the pride before the fall, ushering in an era of sane use of space and efficiency…one can hope.