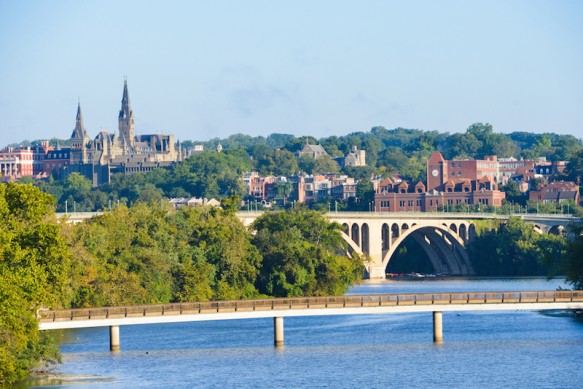 Move to Washington DC or Seattle

Living an edited life is simple in theory. Downsize your home, live with less stuff, walk and bike more, ditch or limit driving–all of this will result in lower financial overhead, allowing you to work less have more free time. It will also lower your environmental impact, allowing you to live in good conscience. But this theory is often at odds with reality. A great deal of the American housing stock is single family homes in sprawling, car-dependent suburbs, thwarting many ambitions to downsize or live a more walkable, localized existence. Then the places that have compact housing and are walkable are so god awfully expensive, that the notion of working less and having more free time can seem like a pipedream. Throw in the desires to live in an area with both a solid job market and decent public schools and you might as well be unicorn hunting. While it is rare to find areas that are affordable (i.e. wages are in line with cost of living), walkable and have solid schools, it is not impossible. A recent study by the real estate site Redfin surveyed 170 neighborhoods in the 20 cities they analyze across the United States. They found that only 24 of those neighborhoods had affordable housing, were walkable and had good schools. And as you might have deduced from the title of this post, a disproportionate number of these neighborhoods were in Washington DC or Seattle.

Redfin first looked at affordability, which they defined thusly:

A home was considered affordable if 28 percent of the local median family income could cover the monthly mortgage and principal payment, assuming the buyer put 20 percent down and took out a 30-year loan with a four percent interest rate. Homes with sale prices 20 percent above that threshold were considered expensive.

They then factored in the neighborhood’s Walkscore.com and Great Schools scores to get the full picture of a place. It was tough to hit high scores in all three categories. Some places with affordable housing had abysmal schools or are not walkable. Some places with good schools aren’t walkable. And so on.

Redfin’s findings do have some overlap with micro-housing. Funny enough, DC and Seattle are the two US cities with the largest number of micro-apartment developments. Other cities with healthy micro-housing scenes like Austin and Chicago also faired well on the list. In fact, Redfin sees loosening real estate development restrictions as a key to making the already good neighborhoods denser and available to more people.

Redfin also gave a great maxim for deciding where to live:

If you also want highly rated schools and a high Walk Score, look for the least-expensive home in one of the mixed-priced neighborhoods on this list. This is a lot like grandpa’s strategy to make a safe real estate investment, “buy the cheapest home on the best block.”

This statement has obvious implications for compact housing, as the cheapest home on the best block is also often the smallest.

For the full study, head over to Redfin’s site.