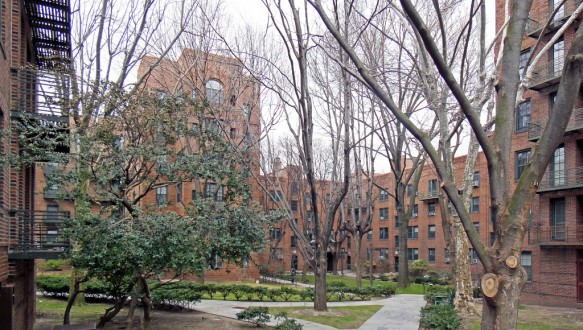 If You Like the Suburbs, You’ll Love Sunnyside Gardens

Lest we forget, car-dependent, suburban sprawl is a very recent phenomenon. For most of human history, living in compact homes in walkable areas was a choice borne of necessity, not lifestyle preference. This is the reason why it’s often wise to look at past precedents for smart architecture and urban planning for how we might build up greener, more connected housing in the future. One particularly interesting example of this is Sunnyside Gardens, Queens. Built from 1923-24, it was one of the country’s first planned communities, and it still stands as a paragon of smart, urban development. 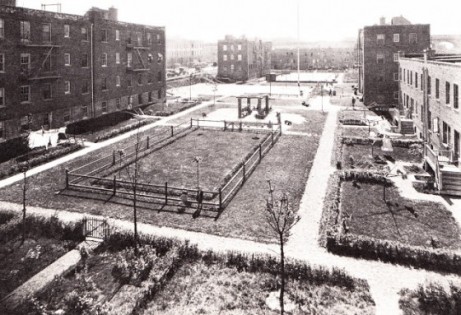 If you’ve hung out in New York City at all you know there are myriad housing typologies across the boroughs–townhouses, walk-up tenements, medium-rise elevator buildings, etc. For the most part, the frontage of these buildings face the street. With minimal setbacks (distance from from door to street) and driveways being the exception rather rule, the city’s housing layout achieves high very density, making for walkable, social living. But this layout also has a few notable drawbacks. First, with few yards and open areas to play, it is not kid friendly; kids in NYC start playing on sidewalks and streets at a young age for better or worse. And while many love being thrust into the action the second they walk out the door, after a while many city-dwellers start to crave a little buffer from the sites, sounds and smells of the city. 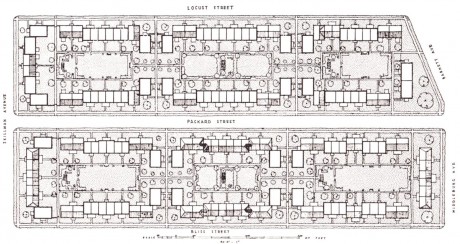 Sunnyside Gardens remedies many of the more unsavory aspects of living in the city. Designed by architects Clarence S. Stein, Henry Wright, and Frederick L. Ackerman as well as landscape architect Marjorie Sewell Cautley, Sunnyside Gardens is a community of one to three family private houses with co-op and rental apartment buildings. Unlike most street-facing urban housing, the homes were built around and faced common gardens and parks. The various different housing types had access to their own private space. From Wikipedia:

Each private residence has a small front garden facing the street and a private garden in the rear. The rental units in the two- and three-family houses enjoy private terraces overlooking the gardens. There are two configurations: the courtyard condition and the mews condition; at the edges of the community some homes simply line the street, with a common walkway running the length of the row. Homes in the courtyard blocks enclose an inner courtyard that was designated a common, landscaped but not used for recreation. Each homeowner actually owned, and paid taxes on, the part of the common in the block and lot, even if it was not used. The mews houses face a common front court and back on alleys; each mews house also has a private rear yard.

Stores and garages, which are typically on a building’s ground floor or on home’s front, respectively, are placed on the periphery of the Sunnyside Gardens’ homes. The net effect of all this is having many of the benefits of living in a suburb, while still maintaining the density, easy access to public transit and other benefits of living in the city (it’s a 15-20 minute subway ride to midtown Manhattan). 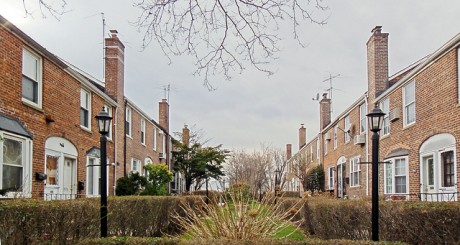 The plain-faced Hudson brick homes and buildings are not necessarily the epitome of high design, but the intelligence of planning compensates for any lack of architectural histrionics. More than anything, Sunnyside Gardens shows that density, tranquility and nature can, with proper planning, share the same space.