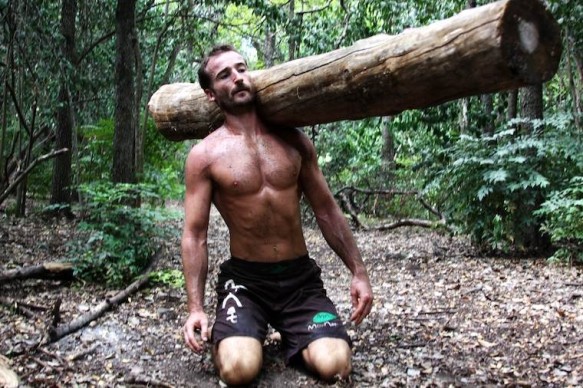 Get Rid of Your Gym Membership, Naturally

Way back in the day exercise wasn’t an activity, it was life. Foraging for root veggies and tracking gazelle all day are not for the soft-of-belly. But the last 10-15K years of civilization have all but eliminated these types of grunt-inducing tasks whose performance was once required to survive. To compensate for this missing activity, we now find ourselves in climate-controlled rooms lifting heavy pieces of cast iron and spinning our legs in ellipses.

At least one Frenchman thinks this ain’t right. MovNat, an exercise philosophy and system created by Erwan Le Corre (the ripped dude up top), is, according to its mission, out to “revolutionize physical education and fitness on a global scale by teaching a real-world physical competency and conditioning system based on natural human movement skills, to support a lifetime of physical activity” (it’s a workout just reading that statement).

Le Corre et al call our modern world the “human zoo”, a place where technology, social conventions and commercial pressures have led to human disconnection “from the natural world and…universal biological needs” (tough to argue with him on that one). This zoo leads humans to mistakenly believe that chronic pain, obesity, depression, frequent illness and lack of vitality are conditions that are “normal and unavoidable.”

MovNat promulgates detailed philosophical, dietary and exercise principles designed to counteract the zoo human condition and return us to state of physical, mental and spiritual equilibrium.

MovNat offers a number of ways to practice. There is the MovNat website, which is filled with a bunch of good info. They offer intensive retreats held around the world. There are certification courses if you want to be a MovNat instructor yourself. They also offer free Movements of the Day (MOD), which run you through a series of movements based on their 13 MovNat Movement Skills; these include walking, running, jumping, balancing, crawling, climbing, swimming, carrying, throwing, catching, and combative skills like striking grappling–in other words, all the things humans used to do to survive. Equipment, if you can call it, are things like trees, boulders and human bodies (Live ones. For carrying or grappling with).

While this author has not done any official MovNat activities, I have participated in my local MovNat Meetup (I found a bunch on Meetup’s site). It’s a lot of fun and helped me shed my feeble attempts to look like a grownup; it is hard to take myself too seriously whilst bear crawling across a field and climbing trees at my local park.

Even though it appears as though MovNat’s is trying create a commercial juggernaut similar to the popular CrossFit, its programs still provide a lot of good stuff. It’s a cohesive and logical workout system that is infinitely portable and requires no gym or special equipment. If it helps the zoo human escape his cage, all the better.