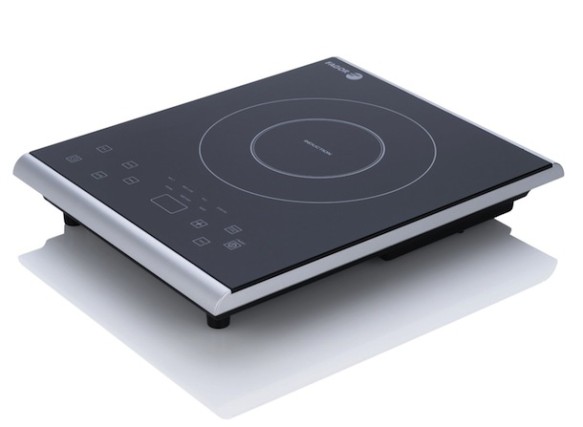 The Hottest Product in the LifeEdited Apartment

In the coming months, we will be highlighting products and services we use in the LifeEdited apartment. Today, we’re looking at the Fagor 1800W Portable Induction Cooktop.

Cooktops and ranges have gotten out of hand lately. Professional-grade models with 5-6 burners have become a must for the modern kitchen. These costly appliances make a lot of sense if you’re running a restaurant, but for most of us, they’re overkill. In choosing a cooktop for the LifeEdited apartment, we wanted to match up our cooktop with the way it would be used. We also wanted something very energy efficient.

Based on their efficiency and sleek profile, we were led to induction cooktops. Since they heat the pot, not cook surface, 90% of the heat is transferred to the cooking implement as opposed to 50% for conventional gas and electric cooktops. And added benefit of this process is the cooktop stays cool.

Wikipedia explains this magic process (lucky for us):

In an induction cooker, a coil of copper wire is placed underneath the cooking pot. An alternating electric current flows through the coil, which produces an oscillating magnetic field. This field induces an electric current in the pot. Current flowing in the metal pot produces resistive heating which heats the food. While the current is large, it is produced by a low voltage.

Not only are they more efficient, but the burners are as much as 50% faster than standard burners because the transmission of heat is so direct.

We considered a number of induction models, eventually opting for the Fagor 1800W Portable Induction Burner. At 1800 watts, they provide comparable heat of conventional gas and radiant electric burners, all while using a standard 110V socket. This was important since we didn’t want to sacrifice performance for the sake of convenience and aesthetics, nor did we want to install high-load electric outlets. We’ve been very happy with their performance–they can boil a large pot of water in about five minutes.

The burners can be stowed away, which makes the kitchen look less kitchen-y–something important in a small space where visual clutter can shrink a room. They give us the flexibility of using the burners wherever we need them, which is nice in a small kitchen where two can be a crowd. We can use as many or as few as we want at a time; typically, only one is out on the counter at a time. We have three total, which stow away in a drawer (see below). 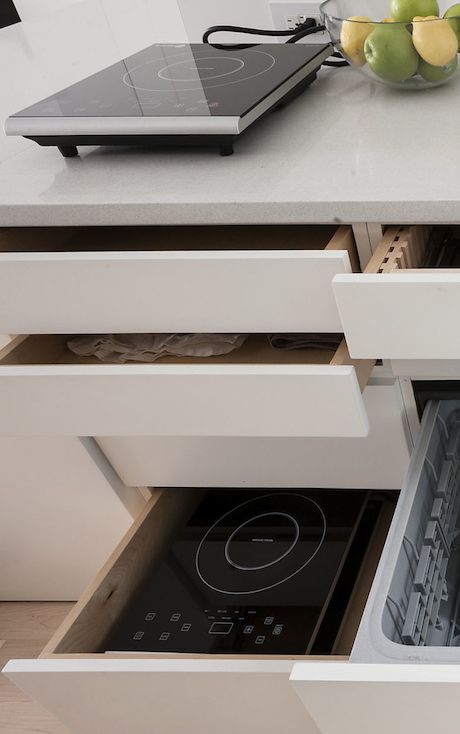 The biggest drawbacks of the burners is that they require ferrous cookware such as stainless steel and cast iron. There are converters available, which enable any type of cookware to be used, though that turns the burner into a radiant surface and negates some of the efficiency. The seven heat settings don’t provide the same fine tuning of a knob, though this has been more of a learning curve issue than a real culinary challenge.

We found the Fagor units on Amazon for $150 each. If you are building a new kitchen–particularly a small one where flexibility is crucial–or find your current cooktops aren’t cutting it or you like traveling with your kitchen, these are a great option.