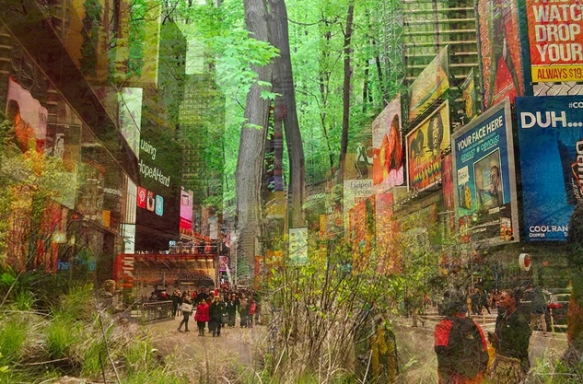 A Taste of Nature in the Most Unnatural of Spots

Living in a crowded city often inspires–or forces–people to edit their lives. Real estate is expensive, so they usually live in smaller spaces, which in turn forces them to have less stuff. High density and public transit make it easy to live without a car. But living in the city–with its noises, abundance of concrete and sometimes indelicate aromas–can make one feel pretty disconnected from nature. And of locations in the world’s cities, there are few spots that feel more disconnected from nature than Times Square in midtown Manhattan. With its huge buildings clad with flashing billboards and throngs of people, the place stinks of the manmade world, a stink that a Kickstarter project called “PopUP Forest: Times Square” is trying to change, albeit temporarily.

The organizers say this about the project:

PopUP Forest: Times Square will give visitors an immersive natural area experience in the most un-natural place on the planet. In the middle of the night, we’ll transform a public plaza in Times Square into a large-scale temporary nature installation. Towering trees, native wildflowers, and ferns underfoot will bring a piece of wilderness to the heart of Manhattan.

As the Popup name suggests, the forest will be gone three weeks later, but not before reminding people there is more to New York City, and the rest of the world for that matter, than concrete and neon. In fact, the organizers point to the fact that the city has 50K acres of open space in its borders.

The project’s creators set out to raise $25K to do more drawings, modeling and prototyping, which in turn will be used to present to various corporate and governmental sponsors who will foot the $1.7M bill for the whole project, which they hope will go up by June 2016 (the next time I’ll go to Times Square I hope). The campaign is already at $31K with 18 days left to go (they’re now shooting for $40K), showing this is an idea with legs. Go to their Kickstarter page for more info.