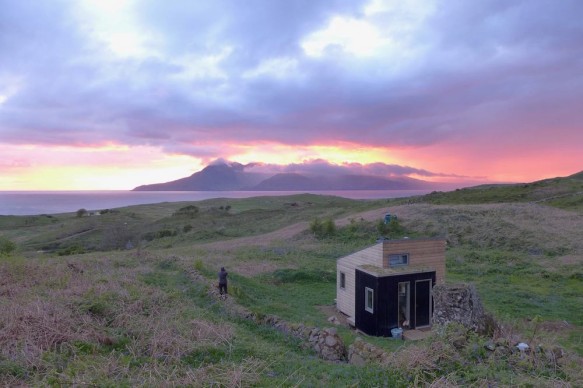 It’s a funny contradiction that the information age–so brimming with raw creative material–is often the assassin of creativity. It’s as if our consciousness has so much data coming in, we have lost the capacity (or time) to put it out. For those looking to do a creative juice fast, a certain (perhaps high) level of digital disconnection is required. And there are few places we can imagine being better for such disconnection as the cabins of the Bothy Project.

Bothy currently consists of two tiny, off-grid art residency cabins in Scotland (they have one other that’s going up next year and have plans to build more).  The spaces were not set up for just any creative endeavor. According to their website, the Bothy Project’s “objective is to create platforms for artists to journey and explore the peculiarities of  the history, mythology, landscape and people in the areas surrounding the bothies”–something we’d imagine would come naturally in such enchanting locations.

The structures themselves are beautiful, modern little cabins set in idyllic locales. Each feature the most basic furnishings and amenities–less to distract you from your craft.

As mentioned, there are two Bothies: the woodland Inshriach House in Aviemore and the coastal Sweeney’s Bothy on the Isle of Eigg. There are three ways to get a Bothy stay. For artist residencies, there are “supported programmes” and “self-directed residencies”; the former being funded by organizations who sponsor an artist’s residency (see the fruits of some of those residencies here), the latter is for self-supporting individuals who pitch their projects to TBP and pay £250/week (these are only available in August and all booked for 2015). You can also rent either cabin in a more conventional manner through booking sites (Inshriach’s is here and Sweeney’s is here).