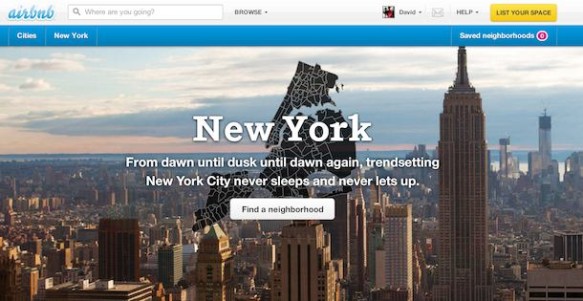 Save Airbnb in NYC

To borrow a too-often-heard buzzword, the sharing economy is disruptive. Everyday citizens are increasingly able to earn significant income streams from their goods and properties, offering these things to the public at a fraction of market rate.

One of the sharing economy’s biggest success stories is Airbnb–the peer-to-peer accommodation service. And there are few places where Airbnb flourish like New York City. No wonder–the city’s average nightly room rate is $281. Beyond providing affordable accommodations for visitors,  Airbnb provides important income for residents looking to offset astronomical rents.

But recently, the NY state has become an ungracious host to Airbnb. Despite a recently overturned fine for one NYC host, the state is saying that short stays are illegal sublets, imposing a month minimum on stays in apartments where the host is not present (13% of NY listings according to Airbnb). The state charges that hosts avoid lodging tax. Landlords assert that the Airbnb visitors present a major security risk.

As a response to these complaints, New York state attorney-general Eric Schneiderman has subpoenaed the company for the identities of the state’s 225,000 hosts, their addresses, the dates and durations of their bookings, and the revenue these bookings have generated. Here’s a letter issued by Airbnb on behalf of a campaign to stop the subpoena:

To Whom it May Concern,

I’m writing to ask you to help save Airbnb in New York.

As a guest who has stayed with a New York Host, you know how unique and local an experience that is. And you also know the majority of our hosts are just regular people making ends meet by renting out their own homes.

Now, that experience is under threat.

The New York Attorney General has subpoenaed the records of almost all of our New York hosts. We are fighting the subpoena with all we’ve got, but poorly written laws make for even worse enforcement. Unless you help to stop it once and for all, the laws may never get better and the threat to our New York community will continue.

Sign Mishelle’s petition to change the NY law and Save Airbnb.

Thank you for standing with our New York hosts. We can create a new world where people can feel at home, anywhere. Let’s create that world together.

Thank you for signing,

The attorney general’s office said the subpoena specifically relates to tax issues. A levying of a reasonable tax makes sense, even retroactively, for Airbnb stays. By “reasonable”, we mean a sales tax or an all together new tax rather than a hotel tax, which would effectively shut down most Airbnb operations.

The likening of Airbnb to hotels is a bit of a reach. Most hosts are normal people making a couple extra bucks on their apartments and homes, not would-be hoteliers. As Paul Carr wrote in TechCrunch a couple years ago, Airbnb’s available rooms amounted to “0.03% of total New York hotel rooms.” It would behoove the city to support these folks as they allow people who might not otherwise visit NYC (or many other locales) to do so.

Airbnb also offers accommodations where they often do not exist. As Airbnb stated in their blog, “From Harlem to Greenpoint, Staten Island to Nolita, 87 percent of our hosts live outside of the midtown-Manhattan hotel district.”

Lastly, the charge of security, while perhaps true in Airbnb’s early days, has largely been addressed. This author knows quite a few NYC Airbnb hosts. A few years ago when the service was taking off, there were many cases of improper activity by guests–one night parties, people hanging outside apartments, etc. But those have mostly disappeared. Guests who do not respect the hosts’ spaces and neighbors are flagged by the Airbnb community and have difficulty renting in the future–that’s the genius of peer-to-peer self-regulation.

If you’re an advocate of Airbnb and the sharing economy, consider signing the petition (they actually bumped their goal to 40K signatures). Regulation is valid and something that should probably be instituted moving forward, but a retroactive witch-hunt is likely to threaten a service that serves a great number of people.

Info via Quartz and Daily Beast