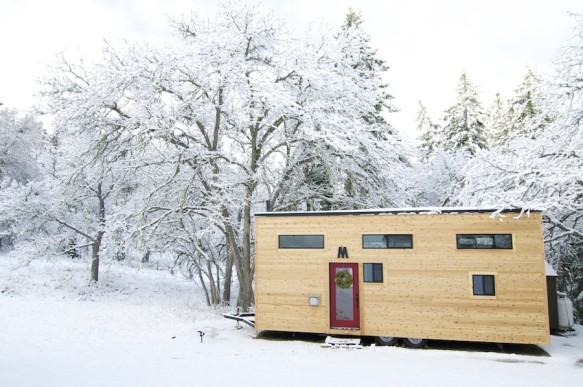 A Tiny House You Might Want to Live In

There are so many cool tiny houses making the rounds nowadays, sometimes it’s hard to keep track of them all. But Andrew and Gabriella Morrison’s ‘hOMe’ tiny house is definitely worth tracking. The couple managed to make an elegant, light-filled, 207 sq ft tiny house (+110 sq ft with lofts) for a shade under $23K–$33K if you include cabinetry and appliances. None of which would be that impressive if the space weren’t so nice. What the Morrisons created was a tiny house that achieves what many do not: it actually looks livable for a normal adult or two. There’s ample light, lounging space and–amazingly–an ample kitchen (see pics and video below for more details).

The Morrisons have built a business around their hOMe, selling plans, how-to DVDs as well as keeping an active blog and publishing numerous videos on the tiny house topic.

Tiny house living is still a pretty fringy thing, made up of DIY types who must sidestep local building ordinances to live undisturbed. We emailed Gabriella a few questions about her project specifically and the movement in general. Here’s what she had to say.

David Friedlander: Andrew lists the price of hOMe but that assumes putting it together yourself. What kind of skill is required to build it? What would you tell the non DIYer who wants one of your homes?

Gabriella Morrison: One of the great things about tiny houses is that because of their small scale, building one, even for those with no previous building experience, is within the realm of possibility. In fact, the tiny house movement is comprised mostly of people that have never built anything before. In terms of building hOMe specifically, we intentionally chose building techniques that are suited for the novice builder and materials that are readily available from any lumber store. As a further resource, we offer a set of step by step instructional DVDs (4 of them) that guide the builder through the entire building process. We wanted to make sure that anyone that wants to build hOMe be able to do so.

DF: How much do you think a hOMe would with hire labor? Has this been done?

GM: To hire someone to build hOMe would double the materials cost. We have spoken with a few professional builders that are interested in building hOMe for clients and all of them have come up with roughly the same price.

DF: Have other people built a hOMe based on your plans?

GM: We have sold a few hundred sets of plans of hOMe so far and currently there are numerous people building it which is incredibly exciting. We are eager to see everyone’s versions of hOMe being brought to fruition. One known version of hOMe was built for the TV show “Tiny House Nation” for a young couple and they did a really creative interpretation of it. They travel around every few months with it for work and seem very happy with it.

DF: Where do you live? Do you ever move it?

GM: We live in the mountains of Oregon. We bought 5 acres and it’s a dream set up so there is absolutely no need (or vision) for us to move it at any point. In fact, we relish in knowing that as long as we live in hOMe and on our own land, we will never, ever have another housing payment again.

DF: How do you think hOMe could be adapted for various other settings-urban, conventional suburban?

GM: hOMe and tiny houses fit a need but to this point, have not necessarily been recognized by zoning departments and building codes. There is an active group of us professional tiny house builders and bloggers working on getting tiny houses legally recognized as homes. Things are moving in a very positive direction as tiny houses fill a need seen in many communities. In terms of hOMe and tiny houses being adapted to various settings, because they are so small and require such a small footprint, there aren’t too many scenarios in which they wouldn’t work.

DF: Anything else our readers should know?

GM: One of the great benefits of so much media attention being placed on the tiny house movement is that it is inviting a new and necessary dialogue about housing to emerge. Questions revolving around how small we can go, debt, environmental stewardship, happiness, relationships, and the future of mankind are being explored in a meaningful way. This all comes at a historical time marked by our depletion of resources at a faster rate than we can replenish them. Housing plays a significant role in this equation and size has very much to do with it.