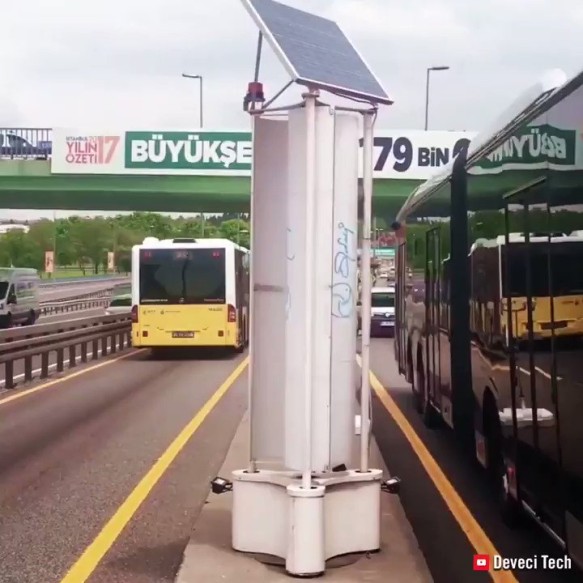 Ever feel that gust of wind when a car rushes by you? That same power is now being harvested into renewable energy. A Turkish company, Devecitech, has constucted their Enlil Wind turbine that harnesses the breeze produced by moving vehicles and converts it into electric energy. They’re intended to be placed along metro bus lines, highways and on urban rooftops as they can still be powered by the natural wind. Still in its developmental stages, prototype turbines are currently being tested in Istanbul. According to their website, Devecitech also claims that the Enlil Wind turbine will have added functionality in addition to capturing wind energy:

“It will also measure the city’s temperature, humidity, wind and CO2 by using the the build-in sensors and the IOT platform. The measurements made by ENLIL will be used on the carbon footprint map to provide the comfort of the city and it will also contribute to the safety of the city by providing information to possible earthquakes in Istanbul with the earthquake monitoring station”.

Shell Global is also backing a similar concept of roadway powered wind turbines. Sanwal Muneer, a young entrepreneur from Pakistan, has received funding from Shell as well as an award from the United Nations. A smaller version in relation to the Enlil Wind turbine, his is made of recyclable carbon fiber. It’s able to produce “kilowatt of electricity, enough to run two lamps and a fan for around 40 hours”. Muneer plans to use them in developing countries and is currently being tested in the town of Dundee, off the east coast of Scotland.

See the video below to see the Enlil Wind turbine in action.