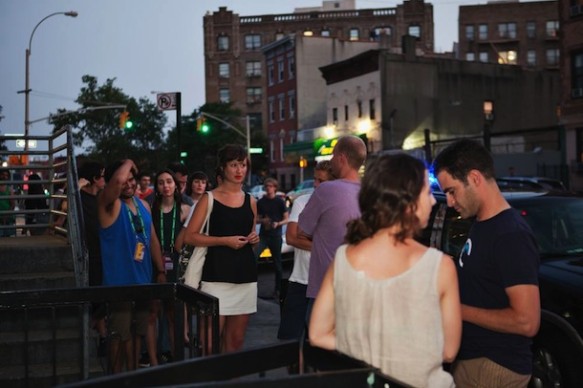 Prior to finding the apartment mentioned last week, my family’s search for a home was getting challenging. Like many places in the country, New York City–Manhattan and Brooklyn in particular–is undergoing a massive housing shortage and consequent real estate bubble.

We knew we wanted to be in Brooklyn where we had both lived for many years. We had what we thought was a modest criteria to meet: a two bedroom apartment somewhat near a park where our son could play.

We started our search in earnest in March, and right off the bat, we found a place in a diverse, hip neighborhood not too far from Prospect Park. The apartment’s 900 sq ft and two bedrooms were perfect for us. It was in our budget. The building did its own composting. The schools weren’t the hottest, but because everything else worked, we felt like we could make it work. We put an offer on the place…one of the 21 offers received.

We came very close to winning the bid, but lost by a hair. Turns out this almost-win would be a high point in the search.  Things got progressively worse. We lost the next bid and the one after that as well; we weren’t even close on those ones. Most of time, there was barely anything we felt comfortable bidding on. This would be the biggest investment of our lives. The bubble seemed to be drawing out hopeful owners looking to make a killing unloading their less-than-desirable properties upon desperate buyers.

We decided to change our tack: we would consider moving out to neighborhoods that were not our first choices. Most of these other neighborhoods were further from larger parks (Prospect and Fort Greene), amenities, transportation and our friends. We figured we could deal with being further out and more isolated if the home itself was great.

We were wrong. These further afield neighborhoods lacked what we wanted from living in the city. There were hour-plus commutes to Manhattan for work related trips; even trips to see friends within Brooklyn could easily take an hour. There was often scant access to greenery. They were further from the amenities that were important to us. Sure, we could have a cool house with some room to grow, but what good was that if we didn’t like the area we lived in?

A few weeks prior to all of this we had seen a place we liked, but thought it too small (I comprehend the irony of me saying that). It was called a two bedroom, but the second bedroom was more like an enclosed dining room. We wouldn’t be able to fit any of our furniture. The price was okay, but it needed work.

Yet we couldn’t put it out of our minds because we loved its neighborhood. It was directly across the street from Prospect Park. It was safe. It was near our friends and many amenities (it’s a 94 on Walkscore.com). It was right next to a train stop and in a great school district.

It was small and would require a shift in the way we lived. It would require getting rid of a lot of stuff–and not taking on more new stuff. It might even require a move after our son hit adolescence. But we realized what we loved about living in the city wasn’t the capacity to isolate ourselves in a large home: it was the ability to be connected to a larger organism, to walk or bike short distances wherever we needed to go, to regularly run into friends. All things being equal, we’d prefer an extra 100-200 sq ft for our home, but to make that happen would mean taking out a large mortgage with higher overhead, or moving to a neighborhood we didn’t want to live in.

We are fortunate to be able to purchase even a small apartment given market conditions in NYC and understand this is not a simple topic–many major cities are making it hard to live anywhere other than the outskirts. That notwithstanding, we think our search informative to buyers and renters regardless of budget. Our hunt really sharpened what mattered to us: that between having a larger home in a neighborhood we didn’t love and having a smaller one in a neighborhood we love, we’d choose the latter option every time.