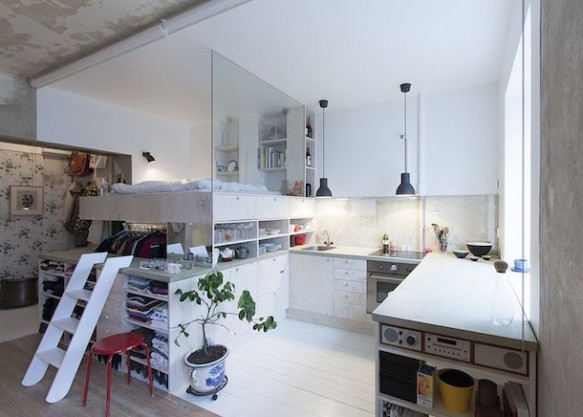 Genius Reno or Architectural Lipstick on a Pig?

Cities like New York, Hong Kong and London tend to get all the attention when it comes to astronomical property values. But there are smaller, quieter cities that might lack the flash, but are still insanely expensive. One such city is Stockholm. Sweden has seen its property values triple in the last ten years and an apartment in its capital city will set you back around $9700/sq meter (66,866 kr). These sky-high prices are one reason why architect Karin Matz did this cost-conscious renovation of a space that had been used as furniture storage for 30 years. Dubbed HB6B, the 387 sq ft studio is an interesting alloy of old and new.

Rather than doing a costly full renovation, Matz split the space into two zones: one polished and new the other rough and old.

Since a big objective was keeping costs low, the polished space was constructed around IKEA kitchen shelving units. Floors and walls were painted white to reflect white. There is a loft bed separated from the kitchen by a large glass pane. There is ample built in storage and shades that pull down to enclose the space. Everything appears to be made of plywood, which we imagine kept prices in check.

The rough side had very little done to it: peeling wallpaper and chipping paint was removed, some electric outlets were added to the outside of the wall. All furniture is freestanding.

The bathroom, which is by the entrance, “becomes the connection between the two parts,” according to Matz. The bathroom door conceals storage and a mini washing machine. There’s a voyeuristic window between the shower area and living room.

The space looks like something that would be featured in Dwell Magazine following some sort of apocalyptic event (meant in the best possible way). The artful retention and incorporation of the space’s previous decrepitude is an interesting way of saving money and adding character. We do wonder how the space will fare over time, though we imagine the rough space could be smoothed whenever the owner is ready.

What do you think? Let us know in our comment section.